When Hernan Lopez, the former chief executive of Fox International, started the podcast network Wondery roughly two years ago with a seed investment from his former bosses at Fox Networks Group, podcasting was still emerging as a media platform.

Now, with voice ascendant, and podcasting proving to be a breeding ground for new narratives that other storytelling mediums can latch onto — the move into the reinvention of radio for the 21st century seems prescient.

According to The Hollywood Reporter, Wondery intends to add new shows to its stable including American Innovations, Dr. Death, and I, Survivor and has optioned Sward and Scale and Tides of History as projects for movies and television.

While traditional media companies are being forced to join forces and combine assets to protect their market from new competitors like Facebook, Apple, Amazon, Hulu, and Netflix coming from the tech industry — new media platforms like podcasting are opening up opportunities for different kinds of studios to emerge.

On average, the modern consumer listens to four hours of audio per day, according to Lopez. Even though most of that is music, an increasing number of Americans are turning to podcasts as a new form of entertainment. And podcasts are beginning to attract more advertising dollars.

“In the podcast world the ads seem to work. They’re native, they’re integrated into the shows. The listeners are welcoming,” says Wondery’s chief executive. That in itself would be a welcome change for media companies hungry for new ways to maintain their ad-supported business models.

Netflix, Amazon, and Hulu have trained a generation of consumers on subscription models that eschew advertising altogether — but podcasts still hold out promise, says Lopez.

Demographics are another key reason that advertisers are moving to podcasts, he says and Comscore research (funded by Wondery) seems to back up his assertions. 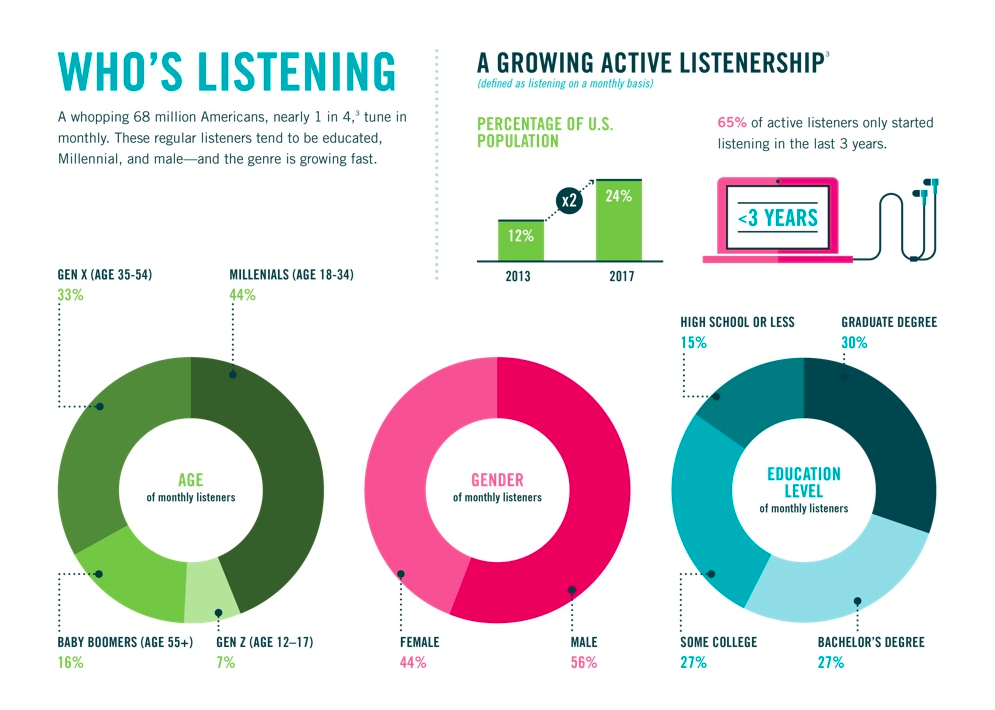 According to Comscore, nearly one in five Americans aged 18-49 said they’d listened to podcasts at least once a month — a number that increases when it’s restricted to the highly coveted demographic of men between the ages of 18 and 34. while nearly one in three men 18-34 do so. Podcast listeners are also more likely to have a college degree, make over $100,000 and be early adopters of electronics, consumer goods, and entertainment.

Wondery is also bucking the media trend of serving up micro-content to audiences.

“We don’t produce much micro-content — if any,” says Lopez. “The stories that we tend to gravitate towards tend to work better in long-form. We have to keep their attention for as long as possible.”

Lopez’s Wondery isn’t the only company to rake in money from institutional investors for building a podcasting empire.

On the other side of the country in the borough of Brooklyn stands Gimlet Media, the $20 million king of the podcast market these days. Gimlet — which raised from a slew of investors including WPP, Betaworks, Stripes Group, Lowercase Capital, LionTree Parters, Emerson Collective, Cross Culture Ventures, and music manager turned investor Troy Carter.

Success among podcasts is also translating into options in other formats. As The New York Times noted yesterday, podcasts are getting “the Hollywood treatment“.

“In the last year or so, podcasts have been the thing,” Matt Tarses, the creator of “Alex, Inc.” (a new ABC show based off of Gimlet Media’s “Startup” podcast) told The New York Times.

Vevo will shutter apps, in order to focus on YouTube