Computational design is the hottest phrase in manufacturing and 3D printing at the moment. It’s changing the way people make all kinds of goods, and Nike used it to design and manufacture its new Vaporfly Elite FlyPrint shoe, which it’s announcing today.

The shoe is a specialized edition of its Zoom Vaporfly Elite 4%, which was used by elite runner Eliud Kipchoge during Nike’s Breaking2 event, which resulted in the fastest marathon ever run. The special sauce in this edition is the FlyPrint upper, which is printed on the fly by a specially customized 3D printer out of a proprietary Nike polymer.

I spoke with Nike’s Brett Holts, product line manager for running footwear and Roger Chen, a senior director for Nike’s NXT Digital Innovation department, about the process and the shoe. 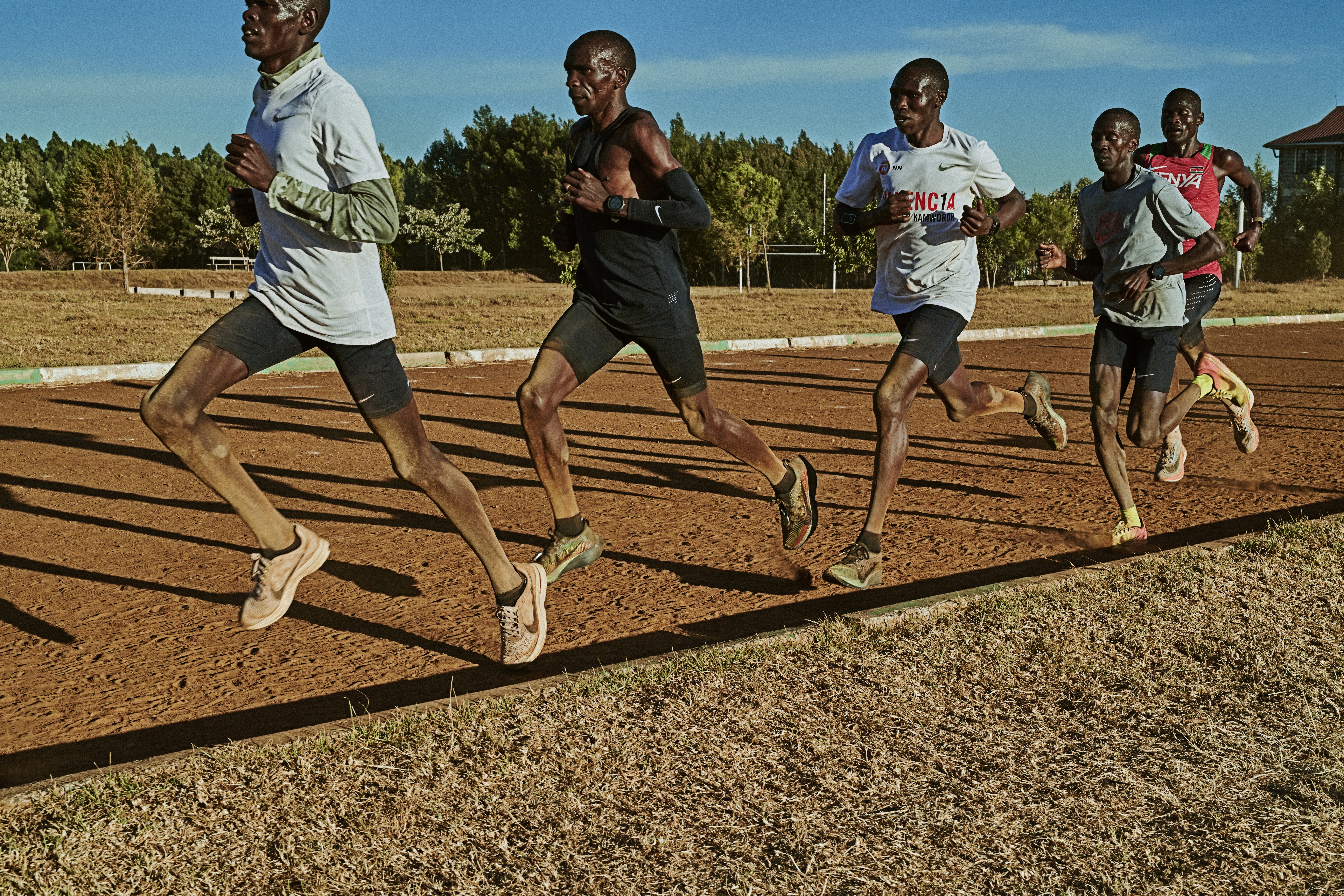 The material is printed out in a pattern specifically designed for a given athlete’s needs and attached to the much hyped Zoom X foam midsole from the 4% model. The process, which Nike is calling FlyPrint, has some similarities to Nike’s other famous ‘fly’ process, FlyKnit, hence the name. The printing process, says Chen, is a lot like painting the material.

The uppers I saw pre-lasting look a lot like a regular butterfly upper, with the same kind of flexibility you’re used to seeing from fabric or other polymer-based upper materials. This is not a hard-shell 3D-printed material, it’s a fabric of sorts. This is reinforced by the fact that several components of the shoe are still made of FlyKnit including the tongue and collar. Those parts are so similar in chemical composition that there is no glue needed to attach them. Instead, the FlyPrint material is bonded seamlessly with the FlyKnit, making for a one-piece design that is stronger and lighter. 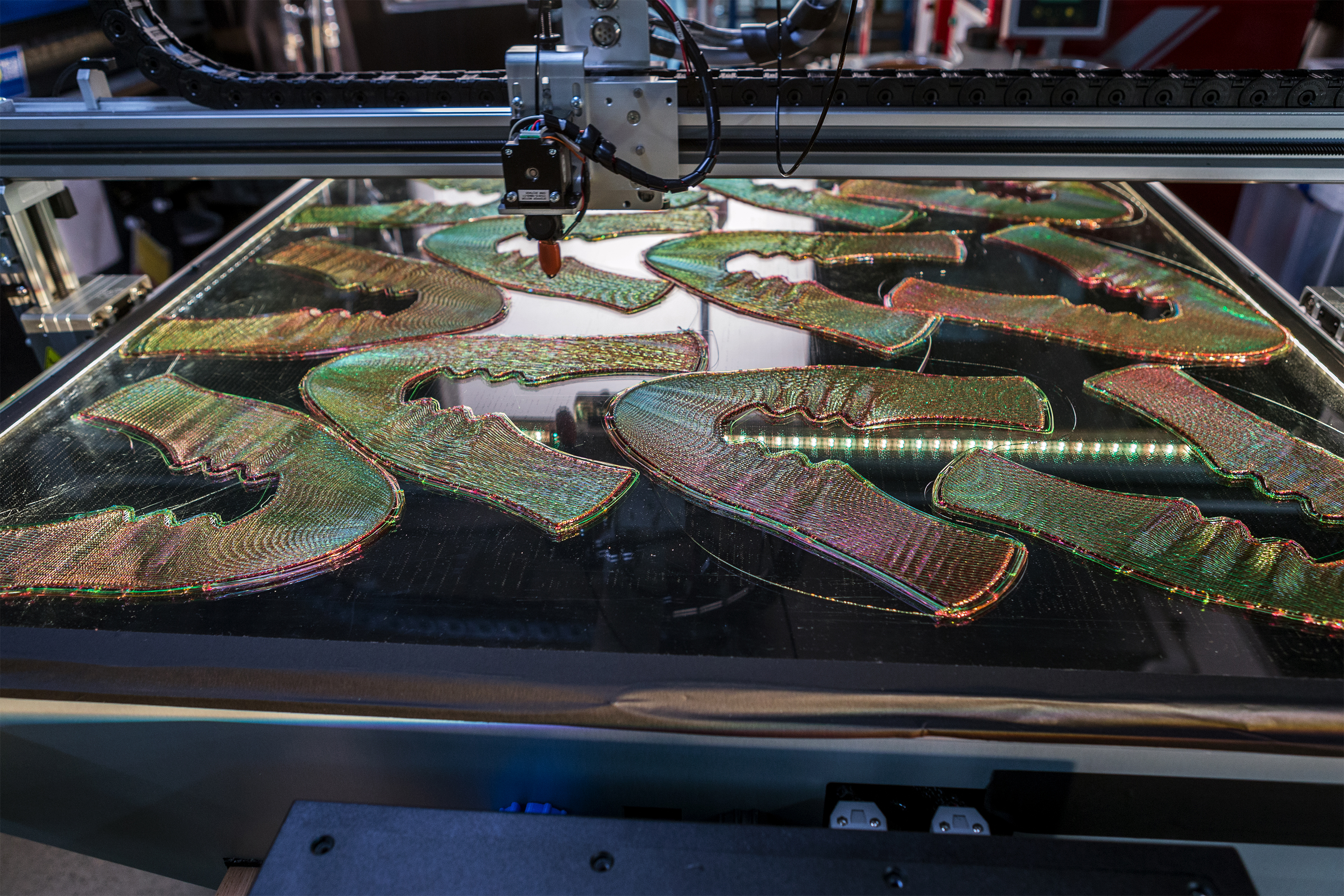 The process of computer aided design in consumer products has a long history — but computational design is an evolution of this concept and has begun to gain steam lately with production-ready 3D-printing processes like Carbon’s M-series digital light synthesis printers and Desktop Metal’s Production System. The guiding force behind computational design is that you feed parameters and physical properties into a model — basically limitations and desired outcomes — and get designs that would either be impossible or incredibly time consuming for humans to produce.

In the case of the new FlyPrint upper, the constraints are the properties of the material and the forces that Kipchoge’s feet were exerting on that material. With that data, along with the chemical composition of the polymer, a computational model allowed Nike to tweak the design for support, flexibility, reinforcement or relaxation on a much more granular level than they could ever accomplish with FlyKnit. 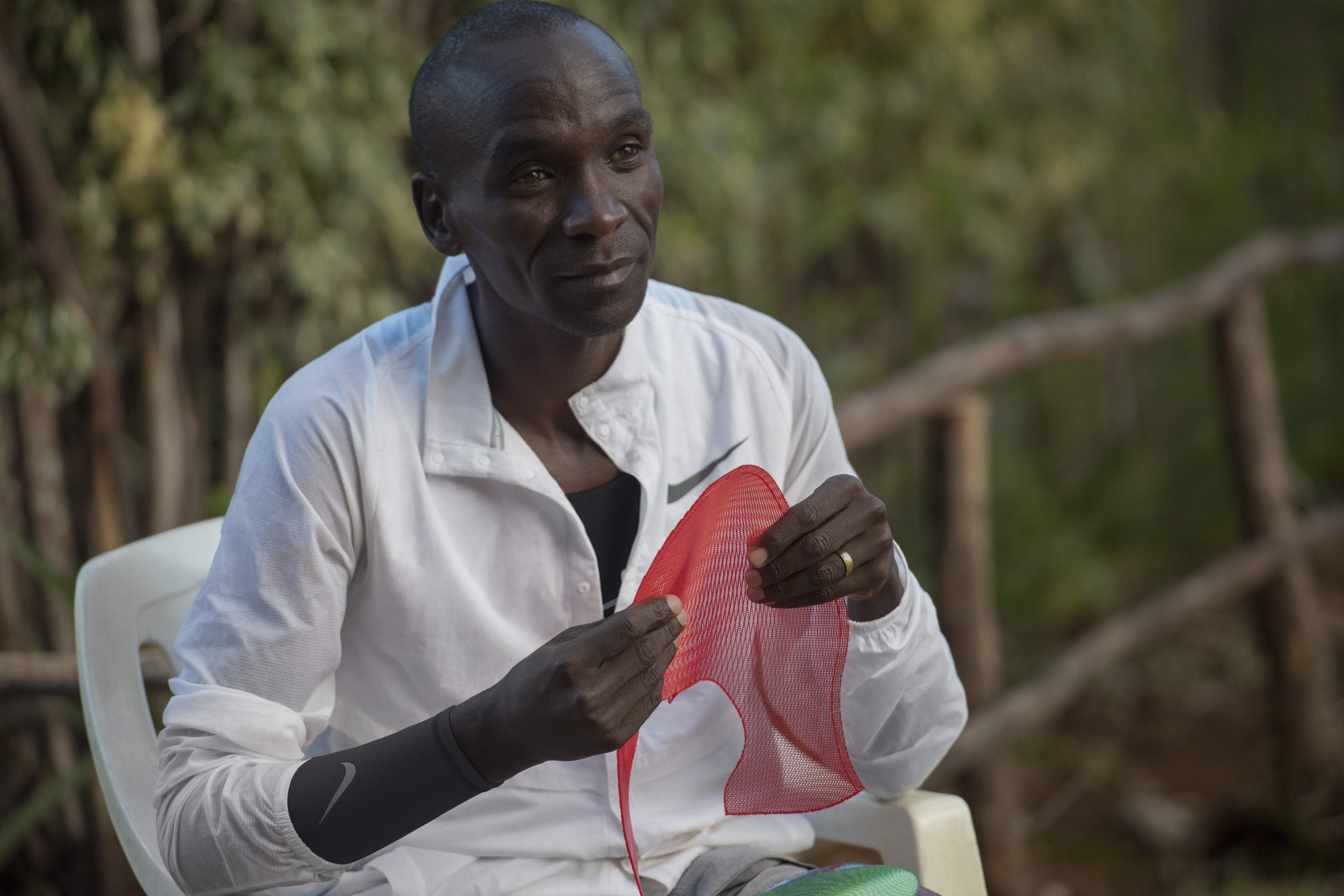 If, for instance, Kipchoge felt that he needed more support through the arch area, the team could tweak that metric in that region, resulting in a more compact pattern of diamond-shaped lattice. In the FlyKnit world (and the world of most knit running shoes) this is done by creating various panels that reflect the properties you want from that portion of the shoe and glueing or stitching them together, adding weight and reducing strength.

Now, Nike can print a fully customized upper in one go, blending it seamlessly with FlyKnit where it makes sense for comfort. 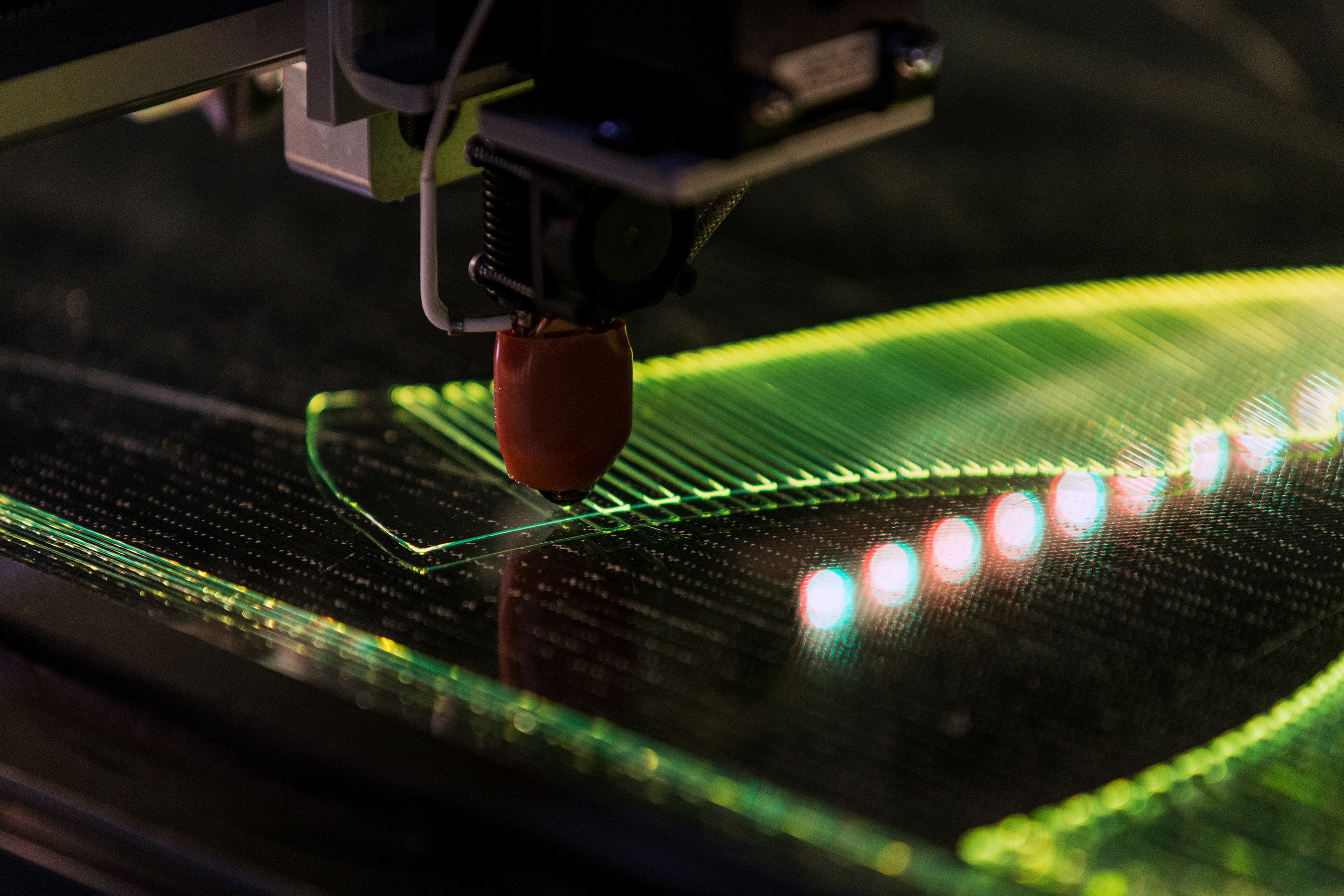 The result of all of this is that the shoe is incredibly light. A 12 gram, or 6% reduction in weight to start. On top of that, one of Kipchoge’s big issues with the Vaporfly Elites in Berlin was water retention in the rain. The shoes started out light but water soaked into the FlyKnit and couldn’t fully make its way out. The FlyPrint upper is nearly translucent it’s so porous, which solves the drainage issue.

Chen says that Kipchoge said that it ‘felt like he was flying’ because he could feel the wind on his feet.

Another huge advantage to FlyPrint, points out Holts, is speed. Nike was able to design and construct every iteration of the shoe through to the final model in just 4 months. As a frame of reference, it typically takes 9 months to a year to get a shoe off the ground.

“We would never have been able to do that [with FlyKnit],” says Holts, “we were addressing the needs of our athlete within 24 hours.”

This day-long cycle — taking into account the Kenyan time differential — of trading feedback with Kipchoge and turning around his requested updates to fit or function was uniquely enabled by using the FlyPrint process.

Additionally, the modeling component of the process allows Nike to scale the shoe through various sizes while maintaining the appropriate ratios of material to negative space for each section.

Nike is using an established 3D printing process called fused deposition modeling, basically painting shapes onto a surface with production-ready TPU materials, but Chen says that the proprietary components of the process lie in how the printers are being driven to lay down the FlyPrint. Neither will say what printers Nike is using but note the company’s history in ‘hacking’ manufacturing tools to get the job done. As an industry note, Stratasys is one of the more established players in FDM printing. 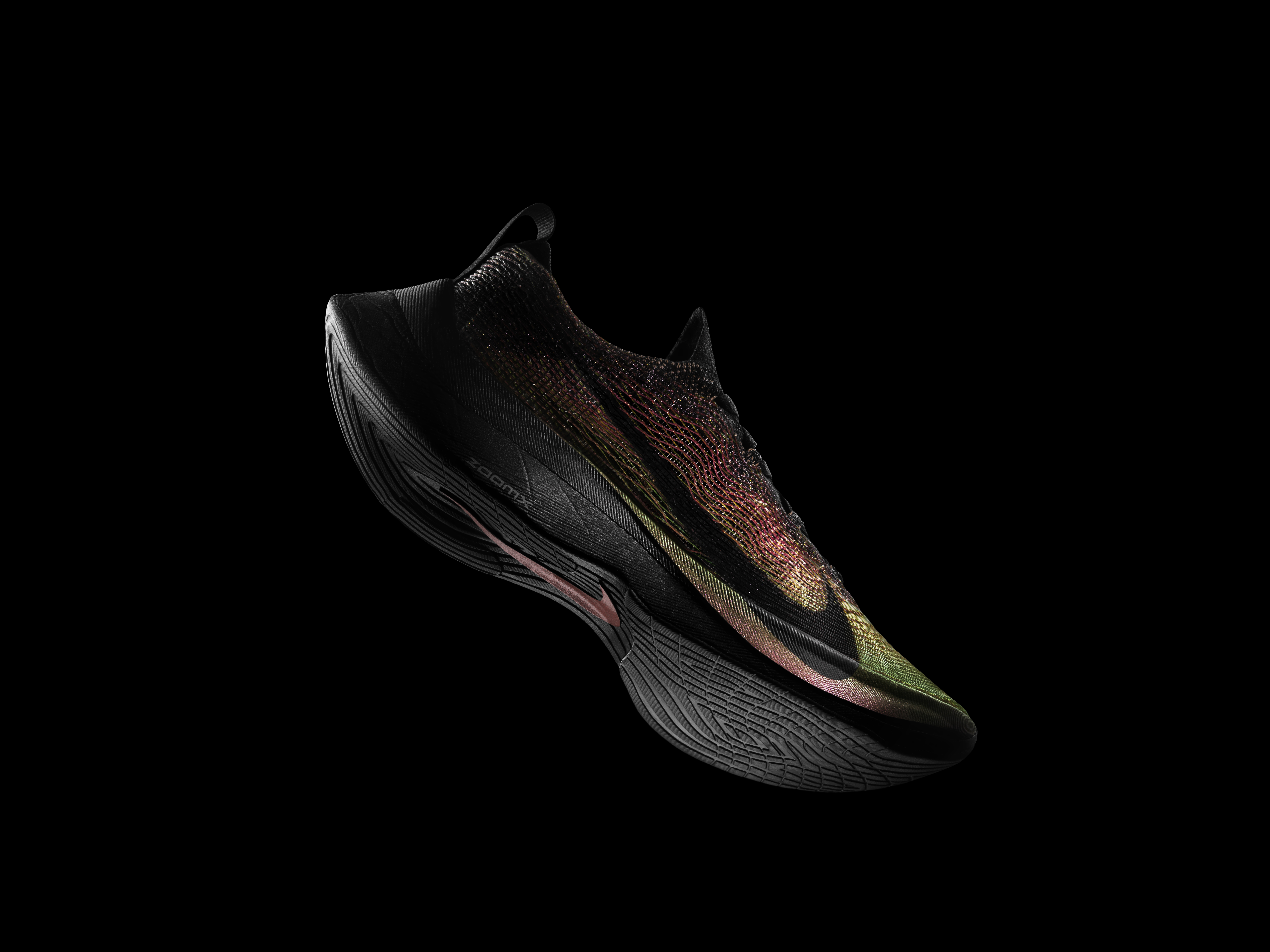 Computational design and production ready 3D printing are changing footwear as we speak. Adidas and Carbon are focusing on the midsole in fashion and basketball, Nike is reinventing the upper for elite runners. But the real gem here might not be the speed or customization — both important advancements.

Instead, it could be the way that the design process is compressed down to mate directly with the manufacturing process. This has the potential to change not just footwear, but every kind of product made. Instead of the lengthy and costly process of injection molding or milling, product designers are, for the first time ever, able to start taking direct ownership of the production process, realizing impossible designs and goals with the use of a powerful feedback loop that includes designer, materials and process in one flow of data.

The Vaporfly Elite FlyPrint is a product for elite runners only, and a small amount of them will be available at an event in London soon, as well as on the feet of Kipchoge and other Nike runners. But there is an epochal shift in the way shoes (and other products) are made coming, and this is one of the harbingers of that shift. Pay attention.

Citymapper lets you find Ofo, Mobike and scooters around you

Huawei P40 Pro Plus is Set to Launch Today