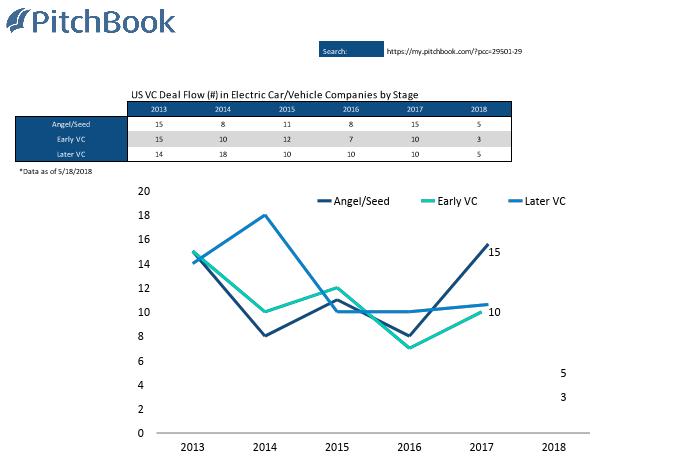 A slew of well-funded new entrants backed by massive amounts of capital are chasing Tesla’s lead in an effort to power the next generation of the electric vehicle industry.

Electric vehicle startups have raised more than $2 billion in the U.S. over the first months of 2018 alone, a huge increase over the $650 million raised in 2017, according to data from PitchBook. And the investment trends point to more competition for Tesla from established car companies and upstart manufacturers alike in the next few years.

All of this activity is thanks to the size of the industry that’s in play. The market for electric passenger vehicles is expected to reach $356.5 billion by 2023 led by $205.9 billion in sales coming from the Asia-Pacific region, according to predictions from the market intelligence firm, Absolute Reports.

Given those numbers, it’s no wonder that investments into electric vehicle companies and the enabling technologies for them keep climbing — and most of the cash commitments are being made in newly formed companies. PitchBook data indicates that early-stage deals are on the rise, with 15 investments into startup electric vehicle companies in 2017. (It’s important to note that PitchBook data, and the work of other market intelligence firms, is somewhat fuzzy and imprecise.)

In 2018, first investments accounted for the bulk of the $2 billion raised. 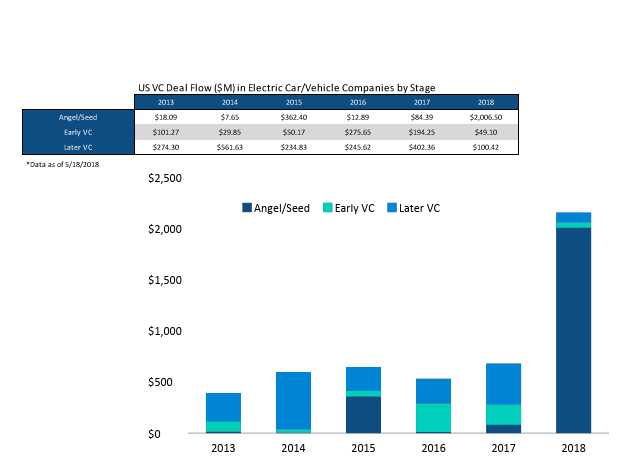 Many of these electric vehicle challengers emerged from the wreckage of other companies that had sought the pole position in the race for auto-industry dominance. Several new companies have emerged from the collapse of Faraday Future and Fisker Automotive, even as both companies found themselves reborn with new leases on life thanks to redoubled capital commitments from global billionaires, Chinese companies awash in money and traditional venture firms angling for a shot at Tesla’s market dominance.

By any measure, Tesla has had a very bad year. Consumer Reports just issued a report saying it could not recommend the company’s latest offering, the Model 3. And production for that new car, the company’s first effort to manufacture a low-cost electric vehicle, has caused innumerable problems for Musk and his staff.

Cost overruns have outlets like Bloomberg speculating that Tesla wouldn’t have enough cash to make it through the calendar year.

The company spends exorbitant amounts of money compared to its established automaker competitors. The company’s staff has ballooned from fewer than 1,000 employees in 2010 to nearly 40,000 now, according to Bloomberg, and competitors like GM and Ford bring in 2.5 times as much revenue for each employee compared with Tesla.

Production problems are also compounded by an aggressive schedule for new vehicles, which has the Tesla hype machine calling for a new Roadster, a crossover car and an electric semi truck all supposedly coming to market in the next few years.

Stalled production and cost overruns aren’t Tesla’s only concerns. The NTSB is investigating the company’s liability in another deadly crash involving its autonomous systems and top executives have been bolting for the exits in what Musk categorized as a “flattening” of his company’s management structure.

No wonder executives at new startups just now entering the market may be thinking that Musk and Tesla may no longer be in the drivers’ seat. 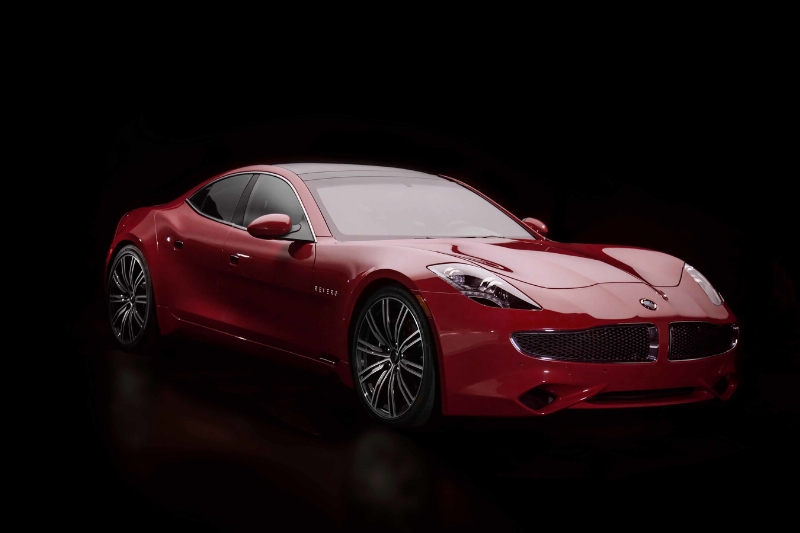 It’s against this backdrop that competitors like Evelozcity and Independent Electric Vehicles, two startups born from the wreckage of Faraday Future (the once-relevant Tesla competitor) have come to market to potentially challenge Tesla’s supremacy. While Independent Electric Vehicles has stayed under the radar — with not much known about the company other than Jalopnik’s report of Chinese backers and an executive team headed in part by Steve Osario, Faraday’s former head of design operations and advanced model development — Evelozcity has made a splash.

From its base in Los Angeles, Evelozcity boasts a $1 billion commitment from undisclosed international backers and a seasoned executive team (culled primarily from Faraday Future) that includes the former chief financial officer of BMW, Stefan Krause; Richard Kim, who was instrumental in the development of BMW’s i3 and i8; and Karl Thomas-Neumann, who joined the company from GM’s European division.

Two other companies in the Los Angeles area, the Irvine, Calif.-based Karma Automotive and a newly reborn Fisker Inc. also have cars they’re putting into the market — along with a rebooted Faraday Future, which reportedly received a billion-dollar investment from a white knight before it was forced into insolvency.

What most of these would-be Tesla competitors have in common is a determination not to eschew the principles of auto manufacturing in favor of a completely new approach.

“There will be a lot of room to grow for many,” said one executive at a new early-stage electric vehicle company. “If I look at the combustion engine industry… when it started you had thousands of companies competing for a much smaller market.”

Global competition and China’s potential to race ahead

If new entrants in the U.S. aren’t worrying enough for Tesla, then the deluge of electric vehicle startups coming from China should. An article in The South China Morning Post listed 10 startups coming from the world’s new economic powerhouse with a combination of capital and manufacturing muscle that could spell real trouble for other independent electric vehicle and autonomous driving-focused automakers.

“Tesla paved the way, now we’re taking this a step further,” Padmasree Warrior, the head of the U.S. arm of Shanghai-based electric vehicle startup, NIO, told The Wall Street Journal. “We have a mission to transform mobility.”

That Chinese investors should push so aggressively into the market isn’t surprising (remember that the Asia-Pacific region will account for $205.9 billion in sales), and global numbers show that investors are already anticipating that rising wave of demand. 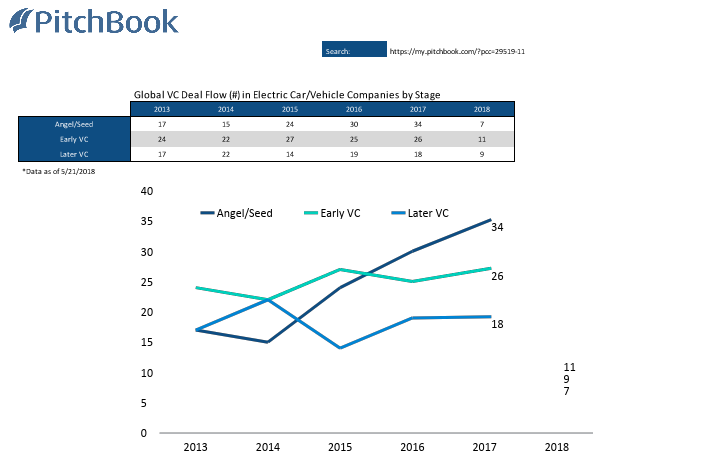 There are at least 34 new, early-stage startups that were launched in 2017 alone to tackle the electric vehicle ecosystem. Of the companies mentioned by The SCMP, six are squarely focused on electrification.

They include Byton, a company backed by one of China’s best (and most government-connected) funds, Legend Capital; along with the auto manufacturer Harmony Auto and League Automotive Technologies. Byton expects to begin production in 2019 and has a seasoned executive team from some of the world’s best manufacturers.

Nio’s backers aren’t too shabby either, given that they include Chinese tech giants, Baidu, Tencent Holdings and Xiaomi. Financial investors include the global venture capital powerhouse Sequoia Capital and domestic dynamo Hillhouse Capital. And the trinity of Tencent, Baidu and Sequoia are also backing another electric vehicle competitor in WM Motor, another Shanghai-based Tesla challenger that has automaker Zhejiang Geely Holding as another pillar in its foundation.

Arrayed against those three new entrants are four other companies like Xiaopeng Motors (backed by two tech titans — Alibaba and Foxconn — and four sterling investors in IDG Capital, Yunfeng Capital, CICC and Morning Ventures); Singulator Motor, which has backing from the Tongling government; and CHJ Automotive, a company backed by two players in the automotive industry, Zhejiang Leo Group and Changzhou Wunan New Energy Car.

Anyone who wonders what effect a flood of Chinese manufacturers can have on a market would do well to look at the role Chinese companies played in significantly driving down the cost of solar panels and wind turbines — and the ways those suppliers now control global renewable energy markets. The Byton connected car is seen during its launch at CES 2018 in Las Vegas on January 7, 2018.  MANDEL NGAN/AFP/Getty Images

Even as these companies raise billions in commitments from investors to build the next generation of electric vehicles, the big automakers that first developed the technology (and then subsequently shelved it) are placing their own massive bets on electrification.

As Reuters reported at the beginning of the year, big auto is committing at least $90 billion to electrify at least some of their most popular vehicles over the coming years.

The big car companies are motivated in part by the competition they see coming from Tesla and startups, but more importantly from government regulations in China, Europe and potentially the U.S.

“There are three contenders for this huge market opportunity,” said one executive at an upstart electric vehicle company, speaking on background. “The first is the OEMs. But they had to learn from Tesla how to do it.”

Originally, these companies were skeptical about market adoption, but now, with China leading the charge toward electrification through regulation they have no choice. “The government will push it,” this executive said. “But the government will then have to deal with the principle of increased margins and higher costs for consumers.”

For this executive, in these still-early days of mass electrification the two companies that are most committed are GM and Volkswagen.

Beyond big auto, this executive also said that big tech — namely Alphabet, the parent company of Google and the autonomous driving company, Waymo, and Apple — represent the biggest competitive threat.

The leader of the pack?

Despite all of the competitors shifting into overdrive, Musk’s Tesla still remains the company to beat — even with its many missteps. The fact remains that Musk is the first person to build a new, independent automaker in the last century. That’s no small feat, but it accomplished in a vastly different competitive environment. It’s easy to win a race when there are only two or three other cars to beat. It remains to be seen how well Tesla can do when it faces a full field.

Samsung will probably unveil the Note 9 on August 9