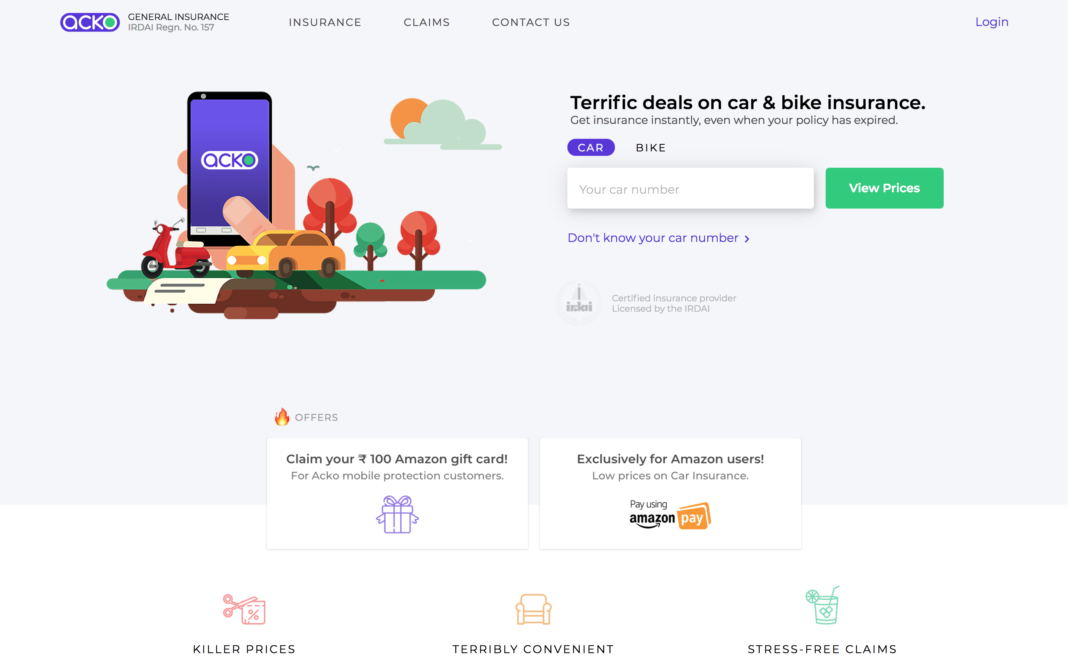 Amazon appears to be restarting its funding efforts in India after Acko, the digital insurance startup in India, confirmed that the U.S. retail giant led a new round of funding for its business.

Amazon — which has been linked with an Acko investment since the start of this year — backed lending startup Capital Float last month, and now it has led a $12 million funding round for Acko alongside Ashish Dhawan, the founder of PE firm ChrysCapital, and existing backer Catamaran Ventures. The deal takes Acko to $42 million raised to date.

Acko was founded in late 2016 by Varun Dua, one of the co-founders of insurance comparison site Coverfox. With Acko, Dua is taking a deeper step into insurance with a digital-only business aimed at disrupting the $10 billion industry in India by leveraging the growth of internet access in India to democratize coverage and develop more relevant products.

The company got off to a good start when investors pumped $30 million into it last year, before it had even acquired a license to offer insurance. (That came in September.) Fast-forward 12 months to today, and Acko has covered the traditional space of automobile insurance policies, and a newer category ‘internet economy’ since January. It’s that latter focus that appeals to Amazon via this deal, which Dua told TechCrunch came about after Acko began talking to Amazon as a potential insurance partner.

Acko has gone after big name partnerships in its pursuit of internet economy deals, which Dua said primarily consists of e-commerce, ride-hailing and travel site-focused products. In April, Acko launched passenger insurance for Uber-rival Ola’s ride-hailing service, which covers riders for obvious items like minor accidents, and eventualities like missing a flight due to traffic delays. The insurance claim system is built into the Ola app to simplify the process for users.

“We know from user behavior experience that passengers tend to contact Ola when they have issues, so we wanted to set up a pretty seamless claims process that’s reasonable integrated,” Dua told TechCrunch in an interview, adding that Acko has covered more than 10 million Ola trips so far.

The company is likely to work with Amazon around e-commerce coverage — the first focus of which will be around gadget protection — although nothing is set in stone yet.

“The idea is to find some way to collaborate in the future,” Dua explained. “We’re a new age insurance company and [Amazon] believes it can create value. They see that bundling financial service or something in the lending space [may] happen [in the future] given the data and numbers of users they sit on.” 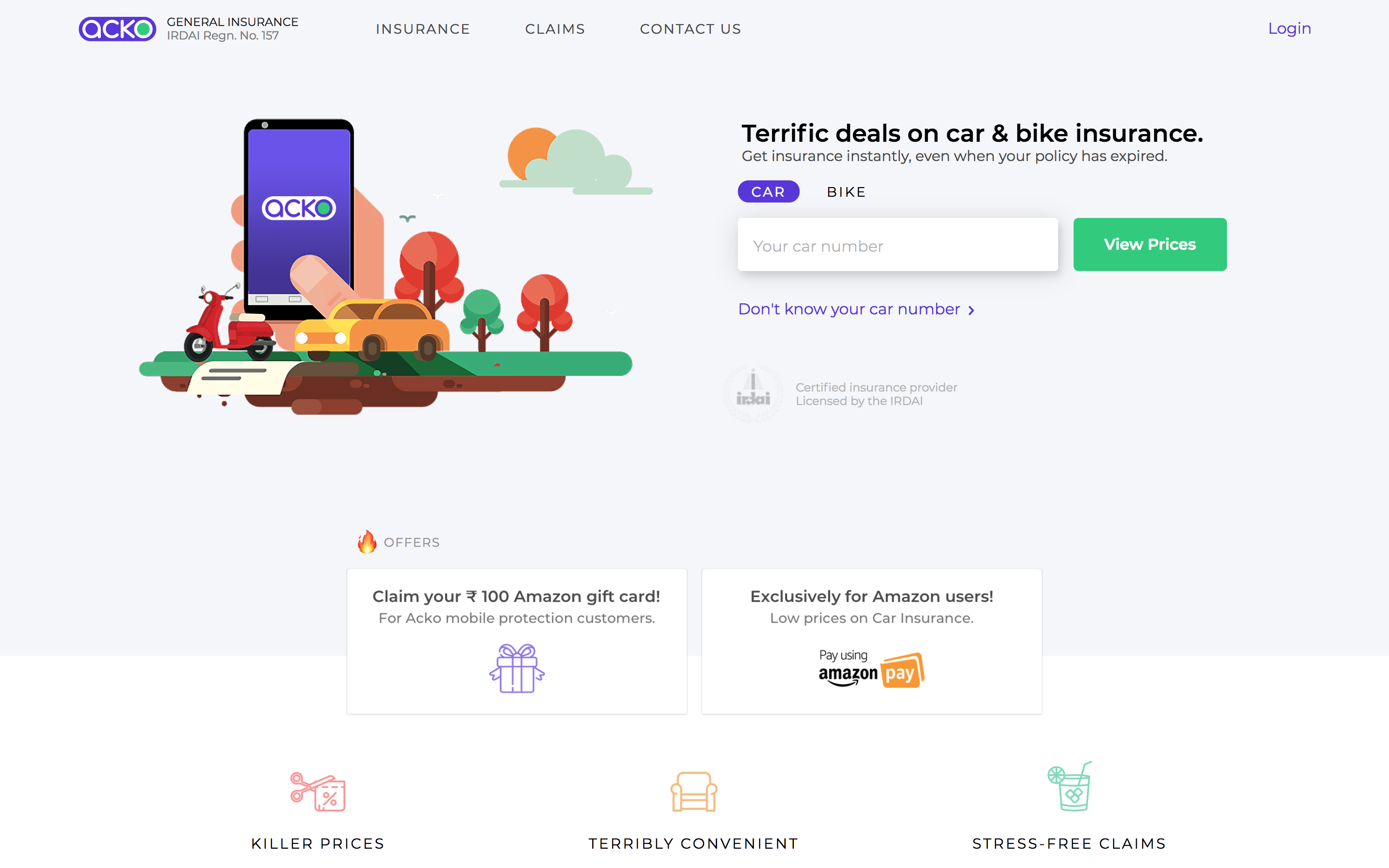 Despite a fierce e-commerce battle in India, Acko isn’t restricted by this deal with Amazon.

Dua said Amazon “completely wants [Acko] to grow independently and it hasn’t laid down any conditions” that might prevent it from working with rivals like Flipkart. Indian media reported that Acko had been in investment talks with Flipkart — which Amazon’s U.S. foe Walmart has agreed to buy a majority stake in — but Dua declined to comment on that rumor.

India has emerged as a key market for Amazon, yet it has backed fewer than half a dozen startups, including home services company HouseJoy, financial comparison service BankBazaar and gift card startup QwikCilver, and acquired just one: payment platform Emvantage in 2016. However, with Capital Float in April and Acko in May, Amazon may be back with renewed vigor.

Dua confirmed that this newest funding round “wasn’t an extremely planned capital raise” but adding Amazon gives the business a further validation.

He said that Acko is aiming to raise a significant funding round next year which would be used to give it a war chest — capital is an important requisite for an insurance provider — and execute on its strategy for the following three years or so. The company has held ongoing talks with undisclosed global insurance firms, Dua said, and that may manifest in a participation in the planned round.

Part of the current focus is bringing a new online approach to traditional insurance, whilst also figuring out new types of cover that apply to today’s digital age. That’s necessitated a relationship with Indian regulators, and an avoidance of traditional startup practices like the hackneyed (but often true) ‘move fast and break things’ approach to product development and user growth.

“A lot of the thing we want to attempt are new and the regulation isn’t always there,” Dua told TechCrunch. “We have to ensure regulators are on board rather than jumping the gun and facing any backlash later.”

Dua added that typically regulators require two months to sign off on new products — like the Ola micro-insurance for passengers — but that communication lines remain ongoing, and often further clarification is required on Acko’s part.

The company’s Bombay office directs the regulator dialogue and related areas such as compliance, finance and auditing. Acko’s other office in Bangalore houses product development, marketing and tech teams. The startup’s total headcount has grown to around 100, Dua said, with a tech team of around 40 whose priorities include developing claims systems, pricing models and integrating with partners such as Ola and potentially Amazon and Flipkart further down the line.

Acko was one of the first insurers to go all in on digital — certainly at its scale — and Dua said over the past year he has heard of new challengers lining up funding, whilst traditional insurers are taking aim at online by breaking out new business units. In his eyes, Acko has a head start on other digital-only outfits — in terms of timing and funding — while he believes traditional players typical struggle with tech talent and have their eyes on legacy businesses which bring in the bulk of their revenue.

Still, he sees these moves as further validations of Acko’s goal of fully digital insurance.

“I genuinely think it’s possible to create a billion-dollar income in five to six years,” he said. “There have been three insurance model generations world: the global retail commercial risk like AIG, progressives such as DirectLine and now there’s a third-way with the likes of [$3 billion-valued U.S. startup] Oscar, [SoftBank-backed] Lemonade and [China’s] Zhong An.

“When we look at India as a market, generation two and three are both missing — there’s a lot of innovation potential in terms of pricing, distribution, claims efficiency and more.”