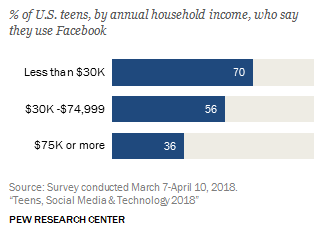 A Pew survey of teens and the ways they use technology finds that kids have largely ditched Facebook for the visually stimulating alternatives of Snapchat, YouTube, and Instagram. Nearly half said they’re online “almost constantly,” which will probably be used as a source of FUD, but really is just fine. Even teens, bless their honest little hearts, have doubts about whether social media is good or evil.

The survey is the first by Pew since 2015, and plenty has changed. The one that has driven the most change seems to be the ubiquity and power of smartphones, which 95 percent of respondents said they had access to. Fewer, especially among lower income families, had laptops and desktops.

This mobile-native cohort has opted for mobile-native content and apps, which means highly visual and easily browsable. That’s much more the style on the top three apps: YouTube takes first place with 85 percent reporting they use it, then Instagram at 72 percent, and Snapchat at 69.

What could account for this divergence? The latest and greatest hardware isn’t required to run the top three apps, nor (necessarily) an expensive data plan. With no data to go on from the surveys and no teens nearby to ask, I’ll leave this to the professionals to look into. No doubt Facebook will be interested to learn this — though who am I kidding, it probably knows already. (There’s even a teen tutorial.)

Twice as many teens reported being “online constantly,” but really, it’s hard to say when any of us is truly “offline.” Teens aren’t literally looking at their phones all day, much as that may seem to be the case, but they — and the rest of us — are rarely more than a second or two away from checking messages, looking something up, and so on. I’m surprised the “constantly” number isn’t higher, honestly.

Gaming is still dominated by males, almost all of whom play in some fashion, but 83 percent of teen girls also said they gamed, so the gap is closing.

Phone-addicted teens aren’t as happy as those who play sports and hang out IRL, new study suggests

When asked whether social media had a positive or negative effect, teens were split. They valued it for connecting with friends and family, finding news and information, and meeting new people. But they decried its use in bullying and spreading rumors, its complicated effect on in-person relationships, and how it distracts from and distorts real life.

Here are some quotes from real teens demonstrating real insight.

Those who feel it has an overall positive effect:

And those who feel it’s negative:

That last one is scary.

You can read the rest of the report and scrutinize Pew’s methodology here.

Netflix and Alphabet will need to become ISPs, fast