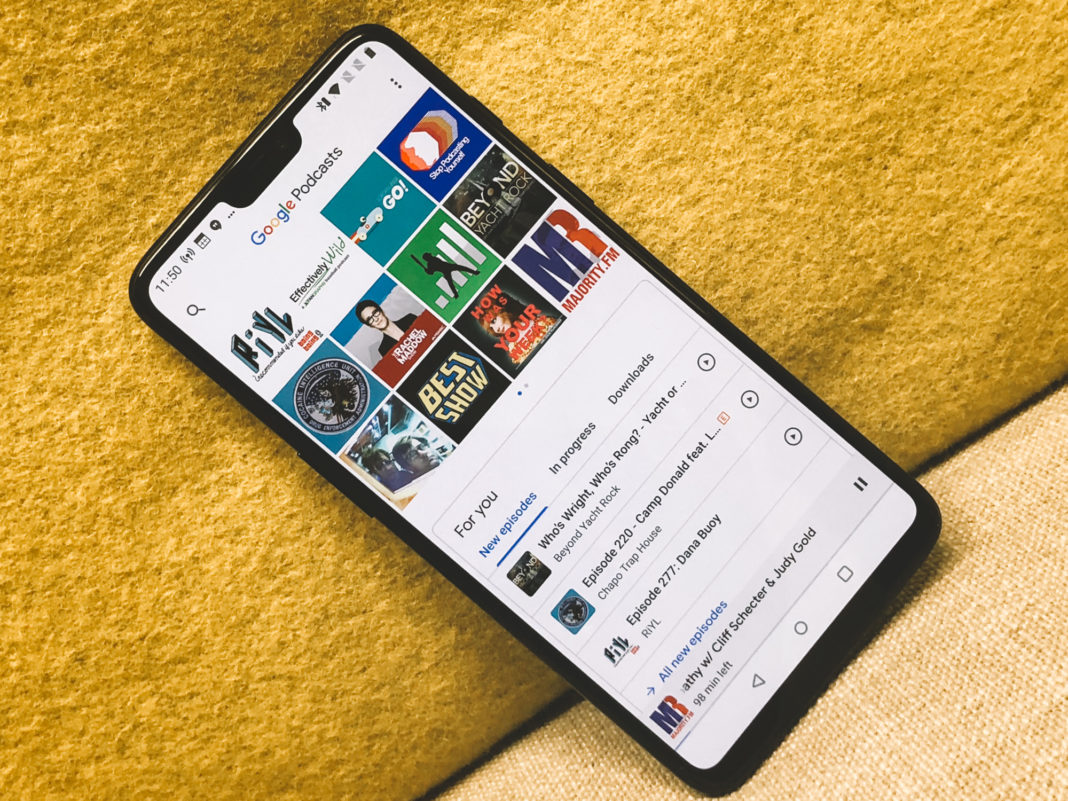 Apple has essentially owned podcasts since their inception. Hell, even the format’s name betrays its close tie to the company’s once ubiquitous player. At best, Google has reluctantly embraced the form, incorporating podcasts into the broader scope of Play, leading many of Android’s billions of users to rely on third-party solutions.

There are plenty of solutions out there, of course — Stitcher, Overcast, Pocket Casts — seemingly as many as there are podcasts. For whatever reason, Google has seemed content to let the competition own the category. Until now, that is. The company just dropped the simply titled “Podcasts.” It’s exactly what you’d expect from Google — a straightforward listening and browsing experience that prioritizes discovery above all else. 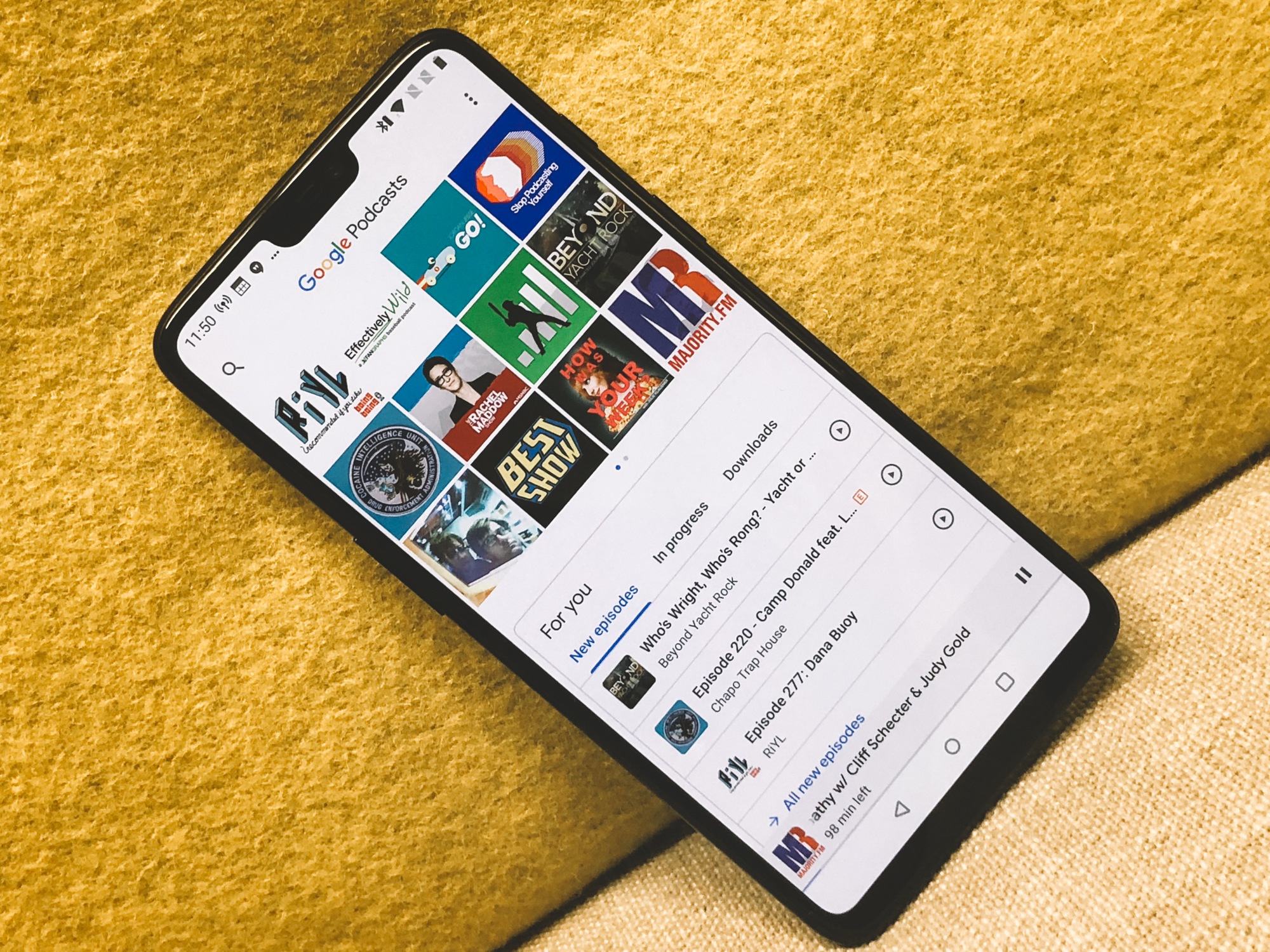 I asked Google why it was so late to the draw in terms of fully embracing the medium. I never really got a great answer on that front, but a rep told me the company was driven to create the new standalone app thanks to the “explosion of creativity” that’s occurred in the past few years. Fair enough. The category is undeniably in the midst of a renaissance, making it one of the most exciting entertainment and informational mediums in the world today.

And with its longtime goal of “organizing the world’s information,” certainly Google is well-positioned to provide a unique service for the 500,000+ active podcasts out there. The new app’s mission statement is, fittingly, to “make it really easier for them to discover and listen to the podcasts they love.”

With that in mind, the app’s discovery mechanism is framed differently than Apple’s. In recent years, Cupertino has pushed toward curation, hiring editors to determine which properties to promote in its various channels. In the case of the iOS podcast app, that generally means that the most popular programs are pushed to the top. Publishers like NPR or ESPN tend to get preferential treatment. And the algorithms that control the top podcast lists are anyone’s guess. 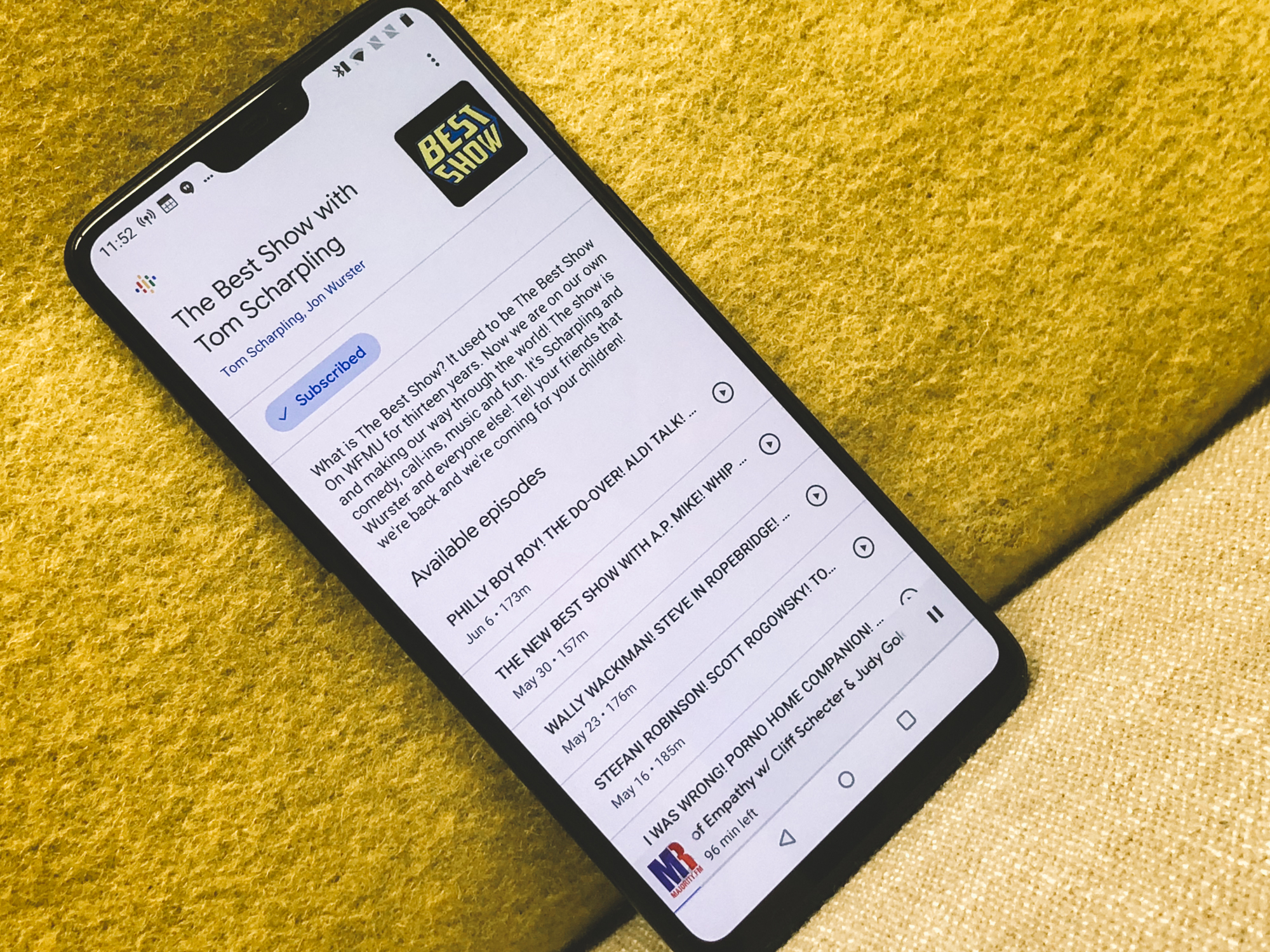 That’s all well and good for first-time listeners. That manner of curation generally does a good job assuring that featured shows adhere to a certain expectation of quality. But podcasting is among the most intimate forms of communication — a proxy for a close conversation with friends. Certainly it stands to reason that recommendations ought to be tailored to listeners in a way that respects that relationship.

Of course, the first time you log into the app, Google’s recommendations are anything but. The page that greets you is fairly generic. You’ve got all of the usual “top podcast” subjects in there — This American Life, Radiolab, Serial. You know the deal — if your parent who’s never listened to a podcast has brought it up in casual conversation, it’s probably in there.

Once you start subscribing to shows, however, the home page shifts accordingly. According to Google, “a few factors, such as your listening habits and the podcasts you subscribe to.” That means, theoretically, that it continues to get better the more shows you listen to and subscribe — and the more others use it, as well.

I’ve only had a short time with the app; so far recommendations still feel a bit generic — things like “Top Podcasts by NPR” and “Popular with Listeners of Stop Podcasting Yourself.” There are also kinks here — my friend Robin does the alternative comics podcast Inkstuds, so the app recommended a bunch of other shows by people also named Robin. That strikes me as a very strange way to choose podcasts. Maybe it’s just me.

There’s also no rating system on-board yet. The feature is likely coming, and will probably go a ways toward helping customize those recommendations. It’s one of a number of features that just weren’t ready at launch time. Google’s also experimenting with speech to text podcast transcriptions as a way of both providing additional metadata to crawl and offering up future features like closed captioning for users with hearing loss. That could be big for a larger potential audience that simply isn’t served by the audio-based format. 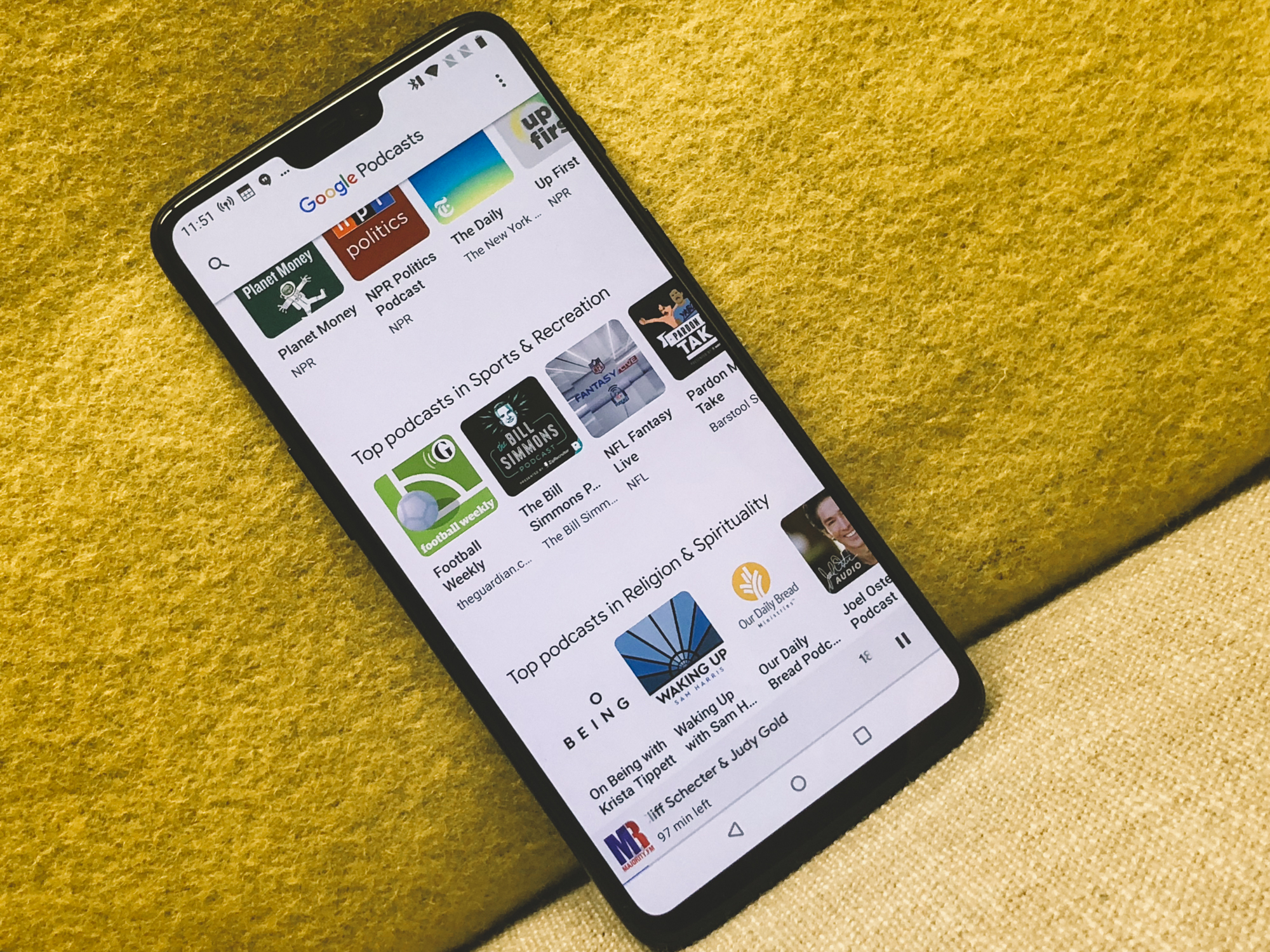 There’s a lot of room for improvement here, but Podcasts is a solid first effort. The interface is packed without being overwhelming. The shows you subscribe to populate a grid up top. Below this, they’re separated by New Episodes, In Progress and Downloads. It’s a nice way of serving up a lot of information, all at once, unlike the Apple app, which seems to make that more difficult with each update.

When a show is playing, it pops up in a small field at the bottom of the screen, which you can swipe up to enlarge. There’s a time scrubber, 10-second rewind and 30-second fast-forward. And yes, there’s a speed feature, for all you weirdos who listen to podcasts at 2x. Google’s offered a lot of customization on that front, with 15 different time increments between 0.5 and 2.0 speed. 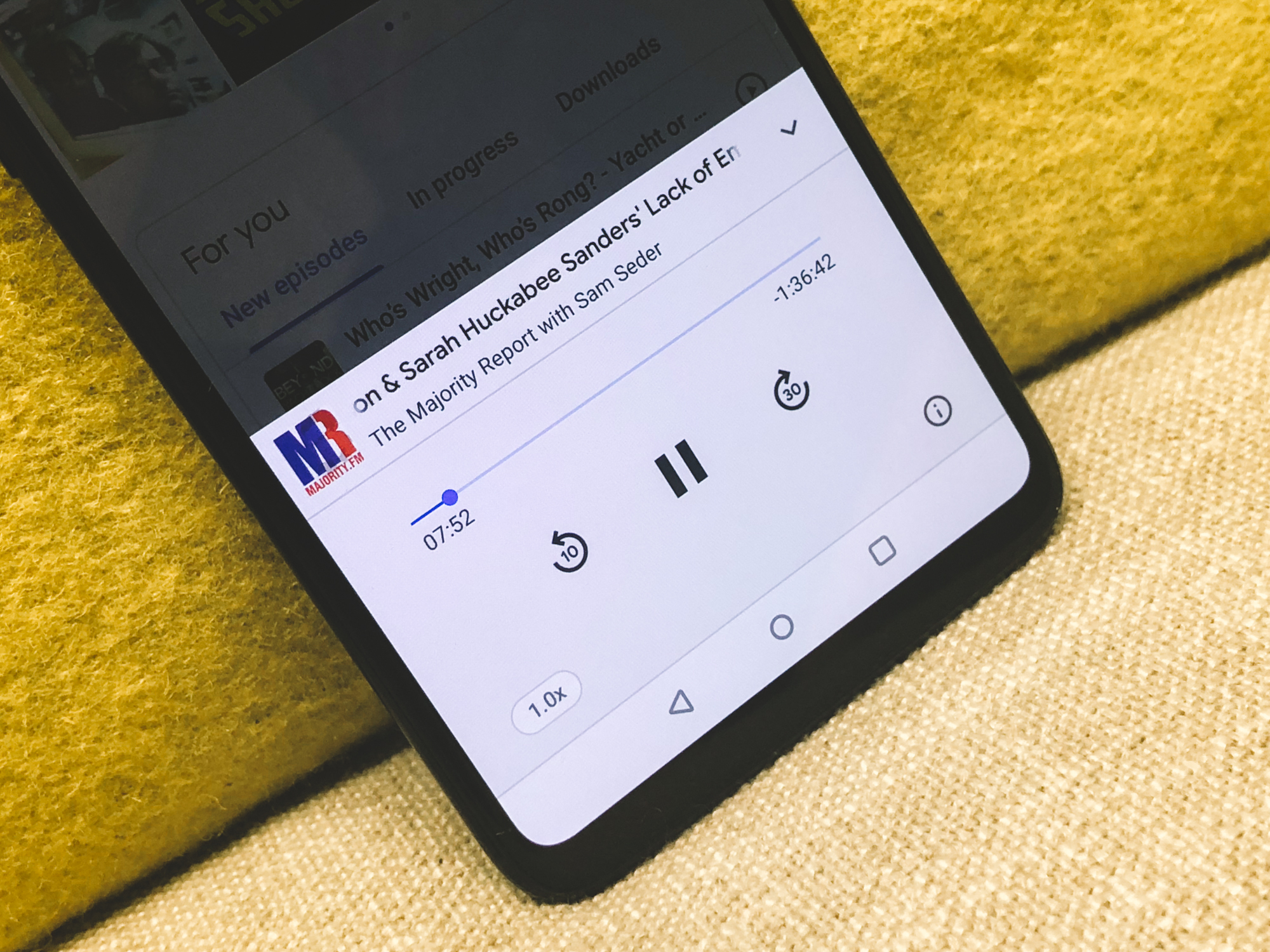 There isn’t a lot to distinguish Podcasts, but it’s a solid first stab at the category. Google would likely be the first to admit that there’s room for improvement here, and based on my conversations with the company, it seems they have a lot planned on that front. Among other things, the company is looking into offering deeper analytics like the kind Apple recently rolled out.

In the meantime, it’s certainly worth the download for Android users who have been looking for another way to listen to their stories. And if you’re looking for a place to get started, why not check out one of these fine TechCrunch podcasts.

Nintendo is releasing a mobile RPG this summer

“Say” is all you need. For all your social needs.