Tesla has opened the Model 3 waitlist floodgates, inviting all reservation holders in the U.S. and Canada to order the electric sedan that’s inextricably tied to its survival.

Tesla won’t disclose how many people in the U.S. and Canada have made the $1,000 refundable deposit for the Model 3. More than 450,000 people had reservations globally at the end of the first quarter, according to a shareholder letter issued in May. The number of Canadian and U.S. customers on the waitlist certainly number in the tens of thousands.

Tesla at a crossroads

Tesla sits at a critical juncture. The company has failed to meet any of its production and delivery targets for the Model 3 since its splashy event in July 2017 when CEO Elon Musk handed out the first vehicles to employees. Meanwhile, it’s pouring through cash as it struggles to solve production bottlenecks for the car that is supposed to thrust Tesla from niche maker of luxury electric cars to mass manufacturer — a vital piece of Musk’s broader master plan to provide and sell a sustainable energy ecosystem of products, including solar panels and energy storage.

The stakes are high and Musk’s actions in recent months have a noticeably frenetic cadence. The company recently erected a massive tent, two football fields in length, on the grounds of its Fremont, Calif. factory that houses a hastily built assembly line for the Model 3.

Musk has taken to sleeping at the factory as the deadline looms.

The company’s Model 3 problems first came to light in early October 2017 when it reported it had produced just 260 of its new electric cars in the third quarter and delivered only 220. Production figures have improved, but the company has yet to hit its targets.

Now, all eyes are on Musk as he tries to meet a goal of producing 5,000 Model 3 sedans a week by the end of June. The company is expected to report production and delivery numbers for the latest quarter, which ends June 30.

Tesla is focusing on higher-margin variants of the Model 3 for now. On Wednesday, Tesla sent an email to reservation holders introducing new Model 3 options, as well as making some noteworthy pricing adjustments and delivery estimates.

Reservation holders can now choose from three versions of the Model 3: the long-range 310-mile rear-wheel drive, long-range dual motor all-wheel drive or the performance variant. Delivery estimates will be shown to customers as they make their selection and will depend upon their order date and the vehicle configuration selected.

Tesla also lowered prices for the dual motor and performance variants. The new pricing will be retroactively applied to customers who have already placed their orders, according to the company. The dual-motor long-range battery Model 3 now starts at $53,000, a price reduction of $1,000. The base performance version is now priced at $64,000, down from $78,000, thanks to Tesla making many of the premium features into optional upgrades. The performance upgrade package is an additional $5,000. Premium paint colors and a white interior each cost an additional $1,500.

For those who are desperate for any Model 3, price be damned, their best option is to pick the dual motor performance version. It’s no mistake that it’s also the most expensive one. Tesla estimates deliveries for this version in two to four months for the earliest reservation holders, according to a review of the design studio.

But for those early reservation holders, who have been pining for Tesla’s cheapest Model 3 — a $35,000 version equipped with a standard 220-mile range battery — the wait just got about three months longer.

Deliveries of the standard battery version of the Model 3 won’t begin for six to nine months for the earliest reservation holders. That means a person who plunked down a refundable $1,000 deposit on March 31, 2016 might not get the standard battery Model 3 until March 2019.

Keep in mind that this base version isn’t an available option yet. The company said in its first quarter letter to shareholders that it will begin offering the base model with a standard-sized battery pack after it achieves a production rate of 5,000 Model 3s a week. 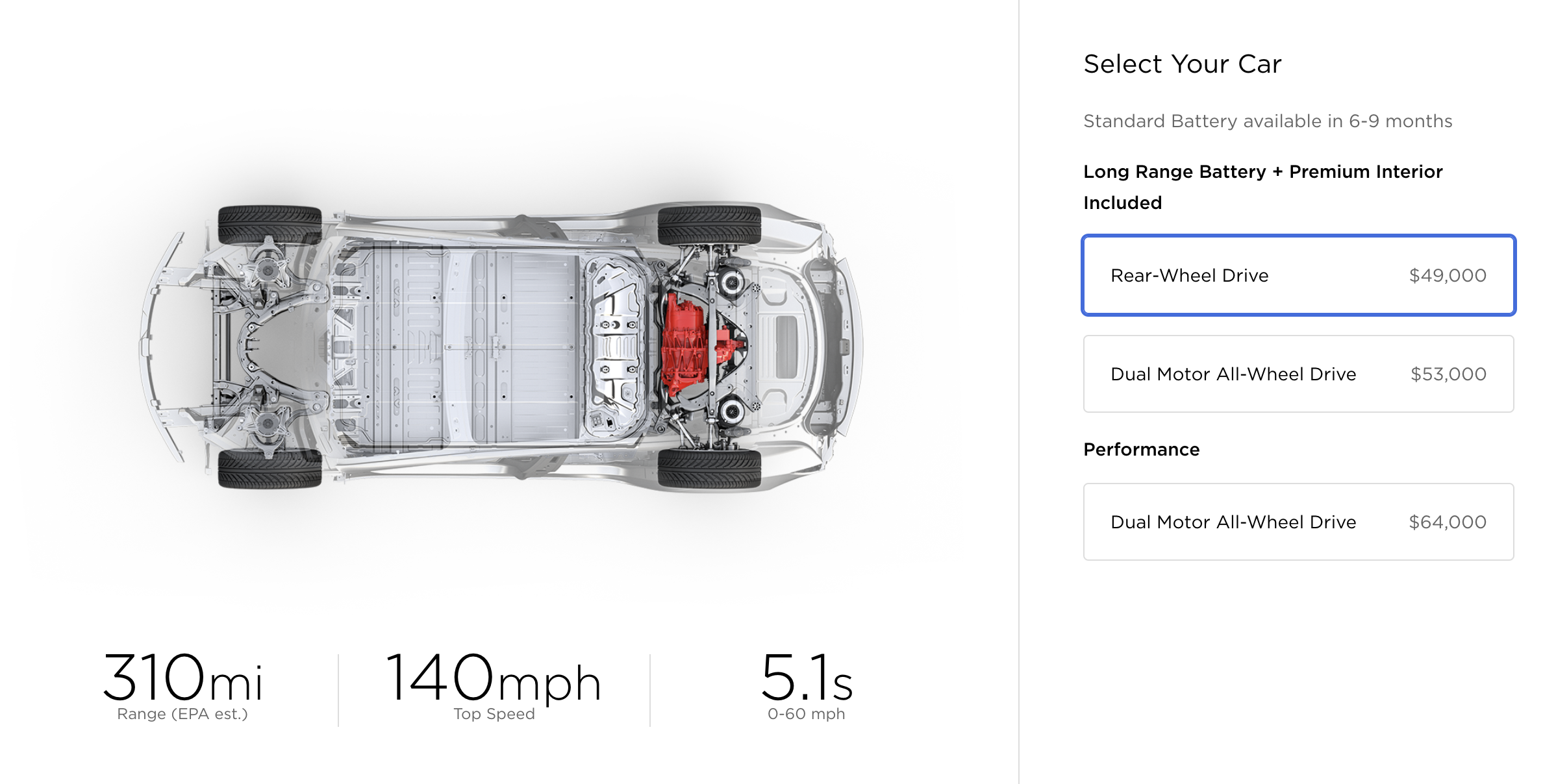 A month ago, the Tesla Design Studio showed deliveries of the standard battery Model 3 (again for the earliest reservation holders) would begin in late 2018. (See the screenshot captured May 25, 2018 below.)

For prospective customers who put down a deposit today, the wait is up to a year. And now that the waitlist has opened up, that timeline could get a lot longer.

Tesla has pushed out the delivery date for the base version of the Model 3 before, largely because it has focused its efforts on higher-margin versions of the Model 3. Production bottlenecks haven’t helped. Tesla estimated back in December that deliveries to early reservation holders for the standard battery version with rear-wheel drive would begin in early 2018.

For the most fervent Tesla fans, another three months might be palatable, even with the repeated delays. But peruse social media and forums dedicated to Tesla owners (and prospective ones) and it’s clear that patience is beginning to dwindle for some. Further delays could prompt folks on the waitlist to finally ask for their deposit back and turn to other automakers that are finally bringing EVs to market, particularly if Tesla loses the federal credit for plug-in electric vehicles.

All plug-in vehicles sold in the U.S. are eligible for a full federal tax credit of up to $7,500. Once Tesla, or any other manufacturer for that matter, sells its 200,000th vehicle in the U.S., it begins to lose the $7,500 tax credit. The credit is not pulled immediately. The tax credit is made available through the end of the current quarter and continues through the following one. From here, credit drops 50 percent per vehicle for another six months. The credit continues to fall until it disappears altogether.

The U.S. and ZTE reach a deal that will lift export ban