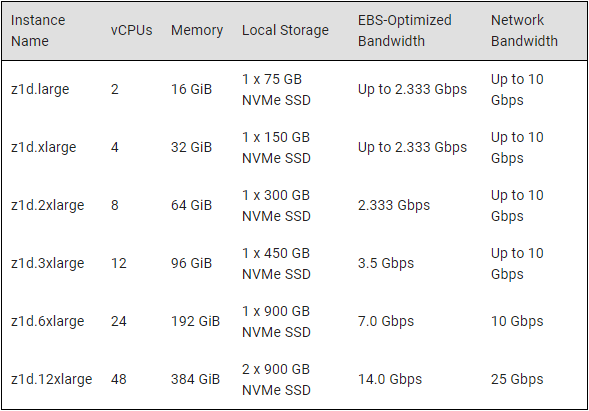 It’s a big day for Amazon’s EC2 cloud computing service today. Not only can you now run EC2 inside a Snowball Edge device, but the company also announced a bunch of new EC2 instance types in the cloud. Thanks to these new instance types, developers now have access to a new instance type (Z1d) with custom Xeon processors that can run at up to 4.0 GHz, as well as new memory-optimized instances (R5) that run at up to 3.1 GHz and that feature up to 50 percent more CPU power and 60 percent more memory than their predecessors. There are also some bare metal variants of these instances, as well as an R5d version that features local NVMe storage.

As Amazon’s Jeff Barr notes in today’s announcement, these new instances types were made possible by AWS’s Nitro system, which allows the company to combine the various building blocks that make up an EC2 instance in new ways.

The new Z1d instances are obviously meant for applications that need a lot of compute power (and for applications that can’t make use of GPUs for that). Amazon specifically mentions electronic design automation, high-performance computing for the financial services industry and relational databases.

The R5 instances, which can feature up to 96 cores and 768 GiB of memory, are mostly meant for in-memory caching applications and in-memory and big data analytics.

With its Snowball Edge, AWS now lets you run EC2 on your factory floor

In hot market for secondary shares, one player, Equidate, just locked down $50 million...