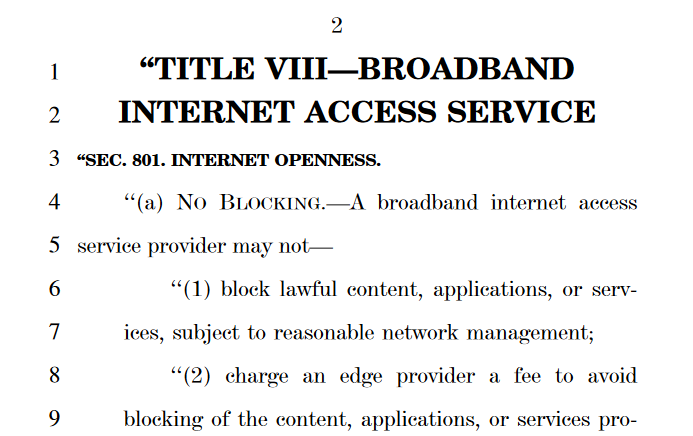 Congress may soon vote on a new bill that would set net neutrality down as a matter of law rather than a set of rules to be changed every few years by the FCC. The “21st Century Internet Act,” introduced by Rep. Mike Coffman (R-CO), would ban blocking, throttling, paid prioritization, and eliminates all questions of jurisdiction.

The bill, announced online and at an event in Washington, DC today, would modify the Communications Act of 1934 (greatly built upon by the 1996 Telecommunications Act) and add a new “Title VIII” full of stipulations specific to internet providers.

This would settle the decades-long dispute over whether internet access is an “information service” or a “telecommunications service,” a legal distinction that either reins in (the former) or unleashes (the latter) the FCC on ISPs.

Instead of quibbling over whether the FCC has authority to write the rules or not, and then quibbling over the rules themselves, the act just codifies the rules as law and sets the FCC as the official watchdog.

The Commission shall have the authority to initiate investigations, bring enforcement actions, issue declaratory rulings, conduct rulemakings, and take other such actions… necessary to implement the requirements of this title.

It would no longer be a question of whether the FCC wants to have net neutrality rules or not — net neutrality would be the law and it would unequivocally be the Commission’s job to enforce it.

The basic blocking, throttling, and paid prioritization bans are very similar to the 2015 rule’s, and the law even institutes the “general conduct” rule that many complained was too vague. This catch-all rule says an ISP “may not unreasonably interfere with or disadvantage” users or edge providers from accessing or providing lawful content and services.

Because it isn’t specific, it means practices that may or may not be legal, such as zero rating, have to be evaluated case by case. That can be a lot of work — but it’s hard to think of a better way to provide against the shifting tactics of crafty ISPs.

Interestingly the act would require the FCC to investigate “unfair or deceptive acts or practices,” something that is frequently on the FTC’s plate — false advertising, misrepresenting the product, that kind of thing. Presumably this is to settle any jurisdictional dispute there, though the FTC may still come into play here and there.

Broadband providers would be eligible to receive money from the FCC’s Universal Service Fund, which it uses to help fulfill its mainline duty of making sure communications infrastructure is up to snuff. And while it could ask ISPs to contribute to the fund, the FCC is barred from rate regulation — telling providers what they can and can’t charge for their services. It was a worry that under the 2015 rules, the only thing stopping the Commission from doing so was voluntary forbearance (the technical term for opting out of statutory authority) from the capability to do so.

Commission Impossible: How and why the FCC created net neutrality

They also wouldn’t count as “common carriers,” a designation that comes with other responsibilities and oversight. This choice is practical if not, some may argue, completely correct: internet providers really do seem to qualify as common carriers as they are generally defined. But before the main reason for designating them as such was to justify the application of Title II, which granted the FCC authority to enforce the 2015 rules.

It’s all very confusing, right? This law, however, really cuts through a lot of the cruft of the past few decades and clearly establishes the “bright line” rules consumers know and understand.

Who will oppose it and why? Broadband providers will of course say first that the act is unnecessary because they’ve pledged to follow the rules voluntarily, and second that it will prevent them from innovating with services that technically break rules but are in fact beneficial to consumers. Don’t be fooled — these services don’t exist and never did. The only one that comes close is zero rating, and it’s a sham.

Remember, broadband providers also loudly called for “regulatory certainty” instead of the seesawing rules of the last five years. Be careful what you wish for!

Conservatives may oppose it because it expands regulations rather than reduces them, which is at least a valid position to take, as little as consumers may agree with it. The rules also have their origins in the Obama administration, which makes them burn partisan politicians at the touch.

It’s always hard to say whether a bill will be a success, and the processes are so slow anyway that it might be a year or more before we see this on the floor of the House. As for the President, it’s hard to say what he’ll do, as with so many other issues. That it would be difficult to cast the bill in partisan terms, practical as it is and introduced by a Republican Congressman, but that doesn’t mean it won’t be vetoed anyway.

Notably Rep. Coffman is lighting the candle under the FCC at both ends (if you’ll permit the confused metaphor) by supporting the House’s Congressional Review Act petition to undo the current administration’s rules: “While my bill moves through the Congress, I am taking an ‘all of the above’ approach by simultaneously signing the discharge petition on the CRA, and introducing my bill.”

At the very least the bill seems a good example of a law that takes the short path to providing consumers with net neutrality protections: direct and to the point, with no sweetheart clauses or funny business as far as I can tell. That said, it may yet be butchered in committee. We’ll follow its progress carefully.