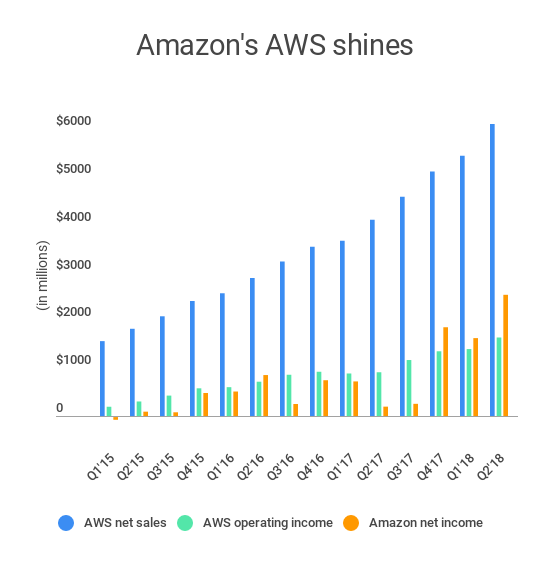 Amazon’s web services AWS continue to be the highlight of the company’s balance sheet, one again showing the kind of growth Amazon is looking for in a new business for the second quarter — especially one that has dramatically better margins than its core retail business.

Despite now running a grocery chain, the company’s AWS division — which has an operating margin over 25% compared to its tiny margins on retail — grew 49% year-over-year in the quarter compared to last year’s second quarter. It’s also up 49% year-over-year when comparing the most recent six months to the same period last year. AWS is now on a run rate well north of $10 billion annually, generating more than $6 billion in revenue in the second quarter this year. Meanwhile, amazon’s retail operations generated nearly $47 billion with a net income of just over $1.3 billion (unaudited). Amazon’s AWS generated $1.6 billion in operating income on its $6.1 billion in revenue.

So, in short, Amazon’s dramatically more efficient AWS business is its biggest contributor to its actual net income. The company reported earnings of $5.07 per share, compared to analyst estimates of around $2.50 per share, on revenue of $52.9 billion. That revenue number fell under what investors were looking for, so the stock isn’t really doing anything in after hours and Amazon still remains in the race to become a company with a market cap of $1 trillion alongside Google, Apple and Microsoft.

This isn’t extremely surprising as Amazon was one of the original harbingers of the move to a cloud computing-focused world, and as a result Microsoft and Google are now chasing it to capture up as much share as possible. While Microsoft doesn’t break out Azure, the company says it’s one of its fastest-growing businesses, and Google’s “other revenue” segment that includes Google Cloud Platform also continues to be one of its fastest-growing divisions. Running a bunch of servers with access to on-demand compute, it turns out, is a pretty efficient business that can account for the very slim margins that Amazon has on the rest of its core business.

Notorious Kindle Unlimited abuser has been booted from the bookstore