Home Phones BlackBerry Key2; Can nostalgia save the grace? 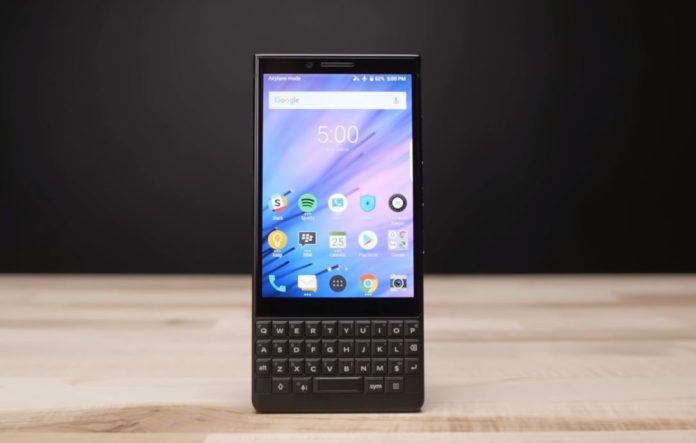 Despite the anaemic sales for the Blackberry Keyone, the company releases its new successor, the BlackBerry Key2 with updated specs and a new dual camera setup while maintaining their unique physical keyboard.

The device comes with Android 8.1 Oreo out of the box, supporting Snapdragon 660 with 6 GB Ram and are available in 68/126 GB Models. The device is the latest Blackberry flagship and retails at 649.99 USD or at 2387 AED and are available through various online stores and carriers.

The Build, Body and Design

Improving upon its industrial looks, the Blackberry Key2 follows similar footsteps to its predecessor, the Blackberry KeyOne. Constructed with series 7 aluminium frame and “Textured diamond grip non-slip back”; or on other words a plastic back.

Considering the majority of flagship devices have become a delicate slippery metal/glass sandwich build, the Blackberry Key2 is build to be far more durable and much grippier.

The Blackberry Key2 relatively stands out among the crowd because of its boxy fresh design elements and physical keyboard. Thanks to an improved ergonomic design, the keyboard is now matte finish and 20% bigger compared to its predecessor, thanks to the shrinking bezels. These slight but noticeable changes make the physical keyboard much better in terms of handling and usage.

The Display, Battery and Camera

Having a physical keyboard means getting only a mere 4.5-inch display with a significantly low 55.2% screen to body ratio, according to GSM Arena. The display is a 1620 x 1080 IPS LCD panel at 433 PPI, which is considering the display size is decent.

Because of the physical keyboard, the cramped in screen has an aspect ratio of 3:2 which is in fact upright bad for multimedia and gaming, as most video content has an aspect ratio of either 16:9 or 18:9. Because of this mismatch, letterboxing issues are going to be a very apparent problem, as this reduces the already smaller 4.5-inch screen by a lot for viewing videos.

The device is touted to have excellent battery life, with Blackberry claiming that the 3500 mAh battery can last up to 2 days of average usage without charging. Thanks to the smaller screen size and efficient processor. The combination of the updated processor and USB Type C charging port bring in support for Quick Charge 3.0.

Probably one of the weaker prospects of the Key2 is its cameras that are just average at best. On paper, the device comes with a dual Camera set up of 12MP (Primary at F1.8)+12MP(Secondary at F2.6 ) which also supports 4K video recording at 30 fps with no OIS. Some Reviewers have noted that the cameras produce overexposed images with less than the ideal dynamic range in daylight while producing softer yet grainy images in low light. As a positive aspect, the camera offers several options including a full manual mode and a surprisingly good portrait mode, both of which were greatly appreciated by reviewers.

The Blackberry Key2 is powered by the Snapdragon 660, which is a disappointment considering that most flagships come with Snapdragon 845, a much better performing chipset. Regardless, the chipset paired with 6 GB of ram and comes with 68/128 GB internal memory with support for expandable storage via SD card.

These specifications with the close to stock Blackberry skin on top on android 8.1 Oreo, ensures the smooth animations and respectable speed.

The Software comes with the usual yet improved blackberry set of apps with a strong focus on security, on the hardware side the device supports a fingerprint scanner for added benefits. The hardware integrates into the software well enough to provide some new and helpful shortcuts and features.

Unfortunately, the better part of the experience ends as soon as you deep dive into DAILY usage, several bugs and inconsistencies start to appear due to lack of well-integrated support of the physical keyboard, as reported by several reviewers.

Is the Blackberry Key2 for you?

If you are a person who often uses their device for Youtube, Snapchat & Gaming etc. The Key2 is not for you, the 4.5inch screen with a 3:2 aspect ratio detrimentally reduces video watching and social media experience. Instead makes sure that the device is only appealing to a niche consumer base that’s very security/work oriented.

Besides the limited consumer base this device appeals to, the Blackberry Key2 also suffers from a pricing issue. For example, another device that supports the Snapdragon 660 is HMD Global’s Nokia 7+, which retails at nearly half the price of the Key2.

Supporting only a few standout features and a disappointing camera makes it harder for the Blackberry Key2 to justify its flagship price, which in turn makes it harder to recommend, especially when paired with a competitive market that offers a lot more for a lot less.

Everything That Apple Has Announced on March 08, 2022