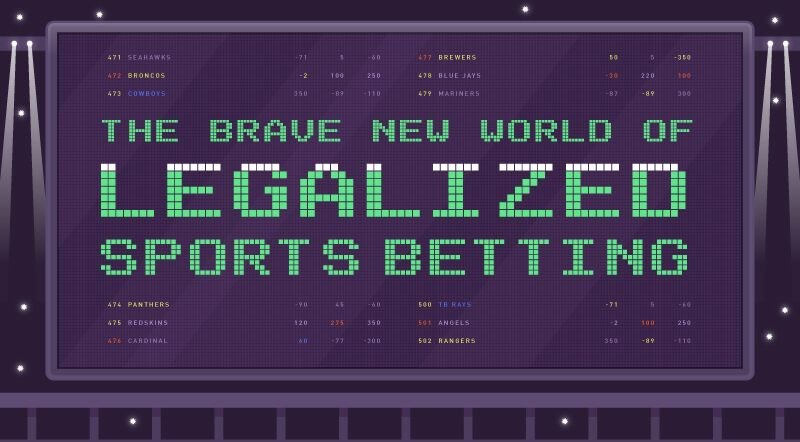 2018 will be considered a landmark year for the sports betting industry in the United States. It was the year where those in favor of legalizing the betting stood up to the Professional and Amateur Sports Protection Act Law and won.

The case was put before the supreme court – should sports betting be allowed? The ruling was that each state had the right to decide whether or not it would legalize the industry. This was classified as a huge win and one that will be celebrated for a long time to come.

To understand just how momentous this decision was, you need to have a look at the work that had already been done on the issue. The situation was quite complicated and a lot of events have happened throughout the last 25 years.

To clear things up a bit, the team behind NJ Games has crafted an engaging infographic. You’ll find the infographic below, but let’s discuss sports betting in the US before we dig into the information galore in the infographic.

Why Was This Ruling A Good Thing?

There are a few reasons why this ruling was a good thing. For starters, the law that it pertained to was a blanket law, applied over all states. Some states did have permission to allow some form of gambling, but these were the exception rather than the rule.

It didn’t really seem in keeping with the freedoms that Americans hold dear. Anyway, freedoms aside, here are some of the reasons it was a good thing.

Legal Or Not, It Was Happening

There were plenty of back-alley deals going on. By legitimizing the industry, you get to put useful safeguards in place to make it safer and better regulated.

Job Creation Is On The Cards

The legitimization of the industry means that there will be new opportunities. Those that may previously have shied away because the activity was illegal might be willing to try now. More punters means more staff to deal with them.

Not One State Is Being Forced

Unlike the law that this ruling pertained to, there is no blanket ruling here. A state can still decide whether or not to legalize this industry. Utah, for example, known as a very conservative state, has stated that it will not amend its laws in this regard.

It Can Help Fill The Government’s Coffers

This is more of a benefit that the one-time bookies would probably feel aggrieved by it, but it is one that can benefit all of us. With them now having to pay tax as any other business would, the bookies become an important way to lower the deficit. We all benefit because the tax burden is shared amongst more of us.

It Boosts The Economy

Any kind of spending is good for the economy and can help to boost it.

Are There Potential Pitfalls?

Naturally, the issue can be raised that by making it easier to gamble, you might be putting people on a slippery slope. The truth is that the person that is likely to become addicted would find a way whether the addiction was legal or not anyway.

Overall, if we look at the situation holistically, being allowed to gamble in some states is a good thing.