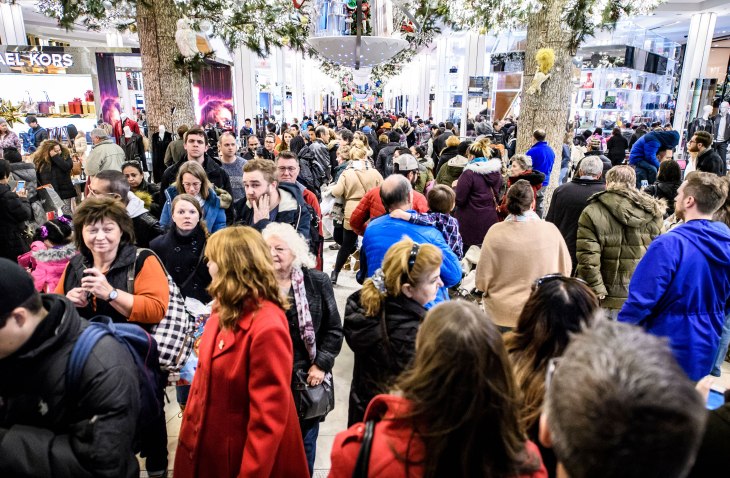 After a record-breaking Thanksgiving with $3.7 billion in digital sales across desktop and mobile devices, Black Friday pulled in a bumper year for e-commerce. Adobe — which tracks trillions of transactions across a range of retail sites — says that $6.22 billion was spent in the day, up just over 23 percent on a year ago.

That was in line with estimates earlier in the day, after tracking sales that saw $4.1 billion was already spent online by 5pm Pacific time.

More than one-third — 33.5 percent — of all sales are coming from smartphones, totaling $2.1 billion. With another 10 percent coming from tablets, mobile overall is coming close to accounting for nearly half of all transactions, a major milestone.

Shoppers have made more purchases online during Black Friday than during all of Thanksgiving the day before, when $3.7 billion was spent (a record amount for the holiday).

Adobe says the day is on track to be the second-largest e-commerce day in US history, behind Cyber Monday 2017, which brought in $6.6 billion. This year’s Cyber Monday is expected to bring in $7.8 billion.

But interestingly, Adobe had revised down its full-day projection for Black Friday. The analysts’ $6.2 billion was down from its previous projection of $6.4 billion. In all, it’s a a big leap on 2017, when shoppers spent $5.03 billion online.

However, these figures are still far behind another major national shopping day. Alibaba alone made $31 billion in sales on Singles Day earlier this month.

2. Amazon warehouse workers in Europe stage ‘we are not robots’ protests

Amazon warehouse workers in several countries in Europe are protesting over what they claim are inhuman working conditions which treat people like robots. It’s the latest in a series of worker actions this year.

They’ve timed the latest protest for Black Friday, one of the busiest annual shopping days online as retailers slash prices and heavily promote deals to try to spark a seasonal buying rush.

In the UK, the GMB Union says it’s expecting “hundreds” to attend protests timed for early morning and afternoon at Amazon warehouses in Rugeley, Milton Keynes, Warrington, Peterborough and Swansea.

At the time of writing the union had not provided details of turnout so far.

Protests are also reported to be taking place in Spain, France and Italy today. Although, when asked about strikes at its facilities in these countries, Amazon claimed: “Our European Fulfilment Network is fully operational and we continue to focus on delivering for our customers. Any reports to the contrary are simply wrong.”

The demonstrations look intended to not only apply pressure on Amazon to accept collective bargaining but encourage users of its website to think about the wider costs involved in packing and dispatching the discounted products they’re trying to grab.

Article has been inspired from https://techcrunch.com/

Giving up on ‘diversity and inclusion’

CardUp raises $1.7M to help small businesses get more out of their credit cards