Home Business This company created a high-tech solution to a 2,500-year-old problem 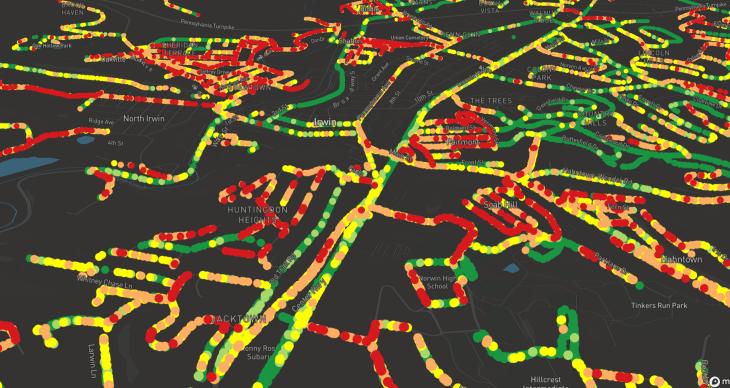 Ever thumped over a pothole while driving and cringed, wondering if you’re one step closer to a flat tire and cursing the powers-that-be that roads never seem to get fixed? The founders of RoadBotics certainly have. They developed technology that identifies and catalogs every crag and crack in streets, alerting authorities of issues through an interface that zooms into the tiniest detail of the asphalt beneath your wheels.

RoadBotics is one of several companies that has received crucial funding and guidance from URBAN-X, an accelerator for startups re imagining city life powered by MINI and Urban Us, whose mission is to solve the challenges that face cities and their populations. We teamed up with MINI to share how RoadBotics makes for fewer bumps in the road on the way to the city of the future – and how URBAN-X helped to pave the way there.

CEO Mark DeSantis says the earliest chapter of RoadBotics’ origin story would be sometime around 500 BC, when the Romans built the first roads. Those roads had to be inspected regularly so they could be maintained and repaired. “They had an [inspector] who sat on a chariot and rode down the Via Appia in Rome and would make notes and send them to the people to fix,” DeSantis said. “Now it’s a Ford F-150 or a pickup truck, not a chariot, and that’s the only difference.”

In Savannah, Georgia for example, which is now one of RoadBotics’ client cities, part-time interns had to manually survey the 700-mile network of roads, a costly and subjective endeavor that took around 6,000 hours over the course of three years, according to Joe Sherouse from the Savannah City Manager’s office.

Now, RoadBotics has found a solution to the problem that plagued Rome 2.5 millennia ago, and Savannah and other cities more recently. The key is in a dash-mounted smartphone in a vehicle that travels a city’s entire street network–in three cities, street sweepers’ vehicles hold cameras, a clever use of existing resources–collecting video footage of the road, which is uploaded to the cloud. RoadBotics’ software creates models of the road surface using advanced image processing and deep learning to rate them, from very bad to pristine. A government employee can select a single 10-foot stretch of road and zoom in close enough to see the road surface and distresses like alligator cracks — a common asphalt ailment and a precursor to potholes — and even view past collected data to judge how quickly the street surface is deteriorating. “They can go from the macro view of the entire network down to a subatomic level of detail and use the data to compare their road network with other similar cities,” DeSantis says of the system’s capability.

This year, Savannah inked a deal with RoadBotics to map half of their streets as a trial. Within a few months, they had received the data and a high-tech rendering of their roads, with a plan to map the rest of the network. With continued use of RoadBotics’ technology, Shearouse said, Savannah will be able to track the deterioration of the roads better, with an eye toward replacing the entire network within 20 years. “It can be hard in government to change how you do something, but this was an easy change,” he said. “This is a movement that has totally changed the outcome of road assessments for Savannah.”

Of course, it’s one thing to have a groundbreaking idea and quite another to bring it to market. That’s where URBAN-X, which provides capital ($100,000 to up to 10 companies per cohort), but more importantly design and engineering expertise and mentorship to start-ups dedicated to confronting the challenges city dwellers face, came in. DeSantis had raised some seed capital, but fundraising for infrastructure technology can be challenging. He’d gotten a minimal version of his product into users’ hands for testing, but needed help connecting with investors and clarifying his message. Then he was introduced to URBAN-X.

“We thought we knew how to raise money and talk about what we do but the feedback and the engagement that we got from the team, I’d call it boot camp style,” DeSantis said. Companies are paired with in-house “experts-in-residence” who help with product development product testing, fundraising and deployment. Companies also travel to Germany to meet with potential partners and customers at BMW. DeSantis also got to meet with officials from the city of Munich, a potential client. Additionally, he learned how RoadBotics’ product could integrate with MINI’s nascent autonomous vehicle technology: Driverless cars collect data that could be co-opted to help evaluate roads. When RoadBotics entered URBAN-X, they had about 15 customers. By the end of the program, they had increased that nearly five-fold.

URBAN-X also helps create community amongst innovators, forging a valuable bond. “You have worries and concerns and no one has possibly had this problem, and we’d learn that everyone in the cohort has this problem,” DeSantis said.

Now, with clients in 15 states and two countries, RoadBotics has earned more than a little street cred. The team has its eye on other ways its data could be used moving forward, in addition to road conditions. Power lines, roadside foliage, sidewalks and guardrails–all features of everyday urban life that lend themselves to visual inspection and require constant maintenance. RoadBotics and its URBAN-X peers are working toward making the cities of tomorrow smarter, and making life brighter for the people who live in them.

More speakers, panels at The Europas, and how to get your ticket free