Home Mini-Stories LEGO Braille bricks are the best, nicest and, in retrospect, most obvious... 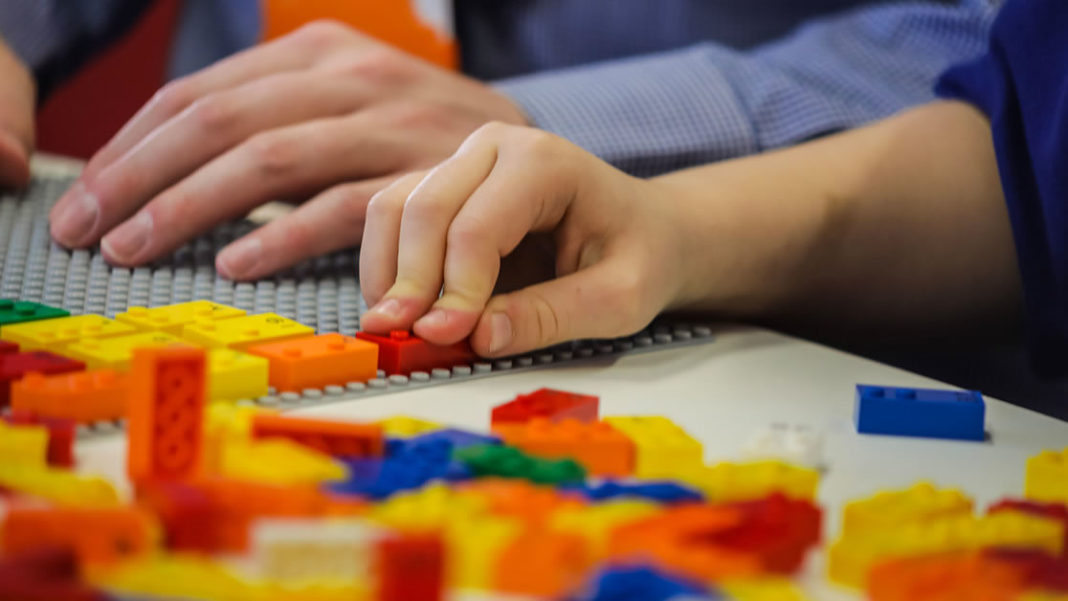 Braille is a crucial skill to learn for children with visual impairments, and with these LEGO Braille Bricks, kids can learn through hands-on play rather than more rigid methods like Braille readers and printouts. Given the naturally Braille-like structure of LEGO blocks, it’s surprising this wasn’t done decades ago.

The truth is, however, that nothing can be obvious enough when it comes to marginalized populations like people with disabilities. But sometimes all it takes is someone in the right position to say “You know what? That’s a great idea and we’re just going to do it.”

It happened with the BecDot (above). and it seems to have happened at LEGO. Stine Storm led the project, but Morten Bonde, who himself suffers from degenerating vision, helped guide the team with the passion and insight that only comes with personal experience.

In some remarks sent over by LEGO, Bonde describes his drive to help:

When I was contacted by the LEGO Foundation to function as internal consultant on the LEGO Braille Bricks project, and first met with Stine Storm, where she showed me the Braille bricks for the first time, I had a very emotional experience. While Stine talked about the project and the blind children she had visited and introduced to the LEGO Braille Bricks I got goose bumps all over the body. I just knew that I had to work on this project.

I want to help all blind and visually impaired children in the world dare to dream and see that life has so much in store for them. When, some years ago, I was hit by stress and depression over my blind future, I decided one day that life is too precious for me not to enjoy every second of. I would like to help give blind children the desire to embark on challenges, learn to fail, learn to see life as a playground, where anything can come true if you yourself believe that they can come true. That is my greatest ambition with my participation in the LEGO Braille Bricks project

The bricks themselves are very much like the originals, specifically the common 2×4 blocks, except they don’t have the full eight “studs” (so that’s what they’re called). Instead, they have the letters of the Braille alphabet, which happens to fit comfortably in a 2×3 array of studs, with room left on the bottom to put a visual indicator of the letter or symbol for sighted people.

It’s compatible with ordinary LEGO bricks, and of course they can be stacked and attached to themselves, though not with quite the same versatility as an ordinary block, as some symbols will have fewer studs. You’ll probably want to keep them separate, since they’re more or less identical unless you inspect them individually.

All told, the set, which will be provided for free to institutions serving vision-impaired students, will include about 250 pieces: A-Z (with regional variants), the numerals 0-9, basic operators like + and =, and some “inspiration for teaching and interactive games.” Perhaps some specialty pieces for word games and math toys, that sort of thing.

LEGO was already one of the toys that can be enjoyed equally by sighted and vision-impaired children, but this adds a new layer, or I suppose just re-engineers an existing and proven one, to extend and specialize the decades-old toy for a group that already seems already to have taken to it:

“The children’s level of engagement and their interest in being independent and included on equal terms in society is so evident. I am moved to see the impact this product has on developing blind and visually impaired children’s academic confidence and curiosity already in its infant days,” said Bonde.

Danish, Norwegian, English and Portuguese blocks are being tested now, with German, Spanish and French on track for later this year. The kit should ship in 2020 — if you think your classroom could use these, get in touch with LEGO right away.

Silver Lake makes a $3B offer to buy property portal Zoopla, the Zillow of...

Google changes its messaging strategy again: Goodbye to Allo, double down on RCS

Social media, politics, and the bubble of distraction