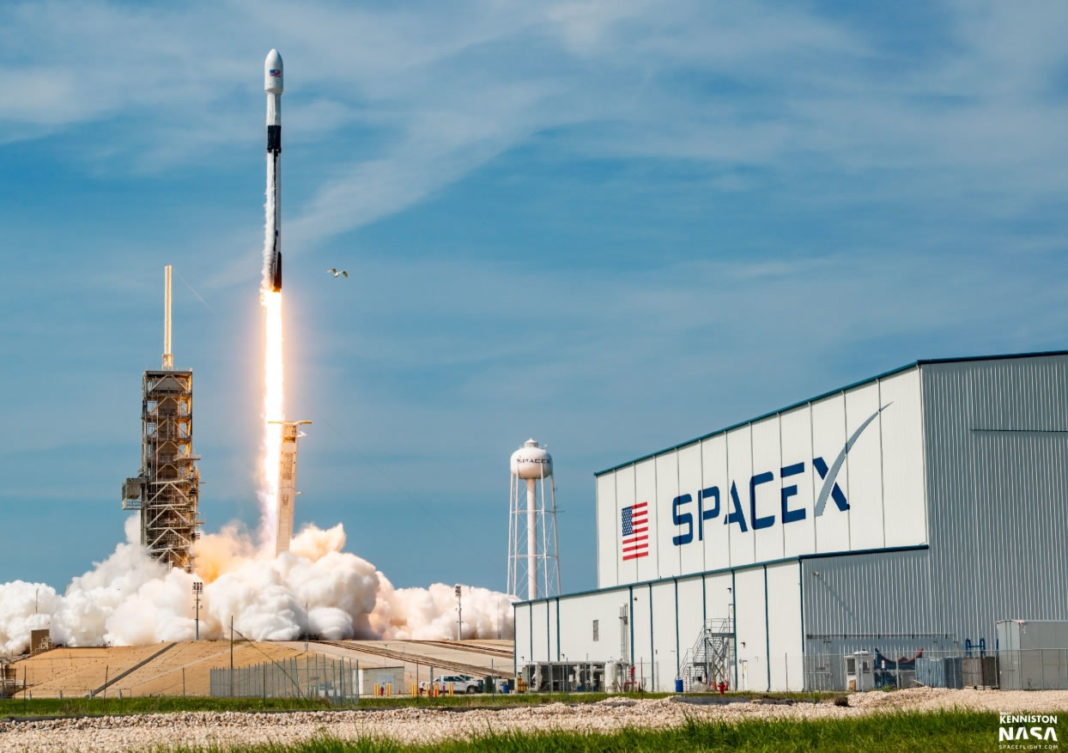 As wild as it sounds, the race is on to build a functioning space internet — and SpaceX is taking its biggest step yet with the launch of 60 (!) satellites tomorrow that will form the first wave of its Starlink constellation. It’s a hugely important and incredibly complex launch for the company — and should be well worth launching.

A Falcon 9 loaded to the gills with the flat Starlink test satellites (they’re “production design” but not final hardware) is vertical at launchpad 40 in Cape Canaveral. It has completed its static fire test and should have a window for launch tomorrow, weather permitting.

Building satellite constellations hundreds or thousands strong is seen by several major companies and investors as the next major phase of connectivity — though it will take years and billions of dollars to do so.

OneWeb, perhaps SpaceX’s biggest competitor in this area, just secured $1.25 billion in funding after launching the first six satellites in March (of a planned 650). Jeff Bezos has announced that Amazon will join the fray with the proposed 3,236-satellite Project Kuiper. Ubiquitilink has a totally different approach. And plenty of others are taking on smaller segments, like lower-cost or domain-specific networks.

Needless to say it’s an exciting sector, but today’s launch is a particularly interesting one because it is so consequential for SpaceX. If this doesn’t go well, it could set Starlink’s plans back long enough to give competitors an edge.

SpaceX hasn’t explained exactly how the 60 satellites will be distributed to their respective orbits, but founder and CEO Elon Musk did note on Twitter that there’s “no dispenser.” Of course there must be some kind of dispenser — these things aren’t going to just jump off of their own accord. They’re stuffed in there like kernels on a corncob, and likely each have a little spring that sends them out at a set velocity.

A pair of prototype satellites, Tintin-A and B, have been in orbit since early last year, and have no doubt furnished a great deal of useful information to the Starlink program. But the 60 aboard tomorrow’s launch aren’t quite final hardware. Although Musk noted that they are “production design,” COO Gwynne Shotwell has said that they are still test models.

“This next batch of satellites will really be a demonstration set for us to see the deployment scheme and start putting our network together,” she said at the Satellite 2019 conference in Washington, D.C. — they reportedly lack inter-satellite links but are otherwise functional. I’ve asked SpaceX for more information on this.

It makes sense: If you’re planning to put thousands (perhaps as many as 12,000 eventually) of satellites into orbit, you’ll need to test at scale and with production hardware.

And for those worried about the possibility of overpopulation in orbit — it’s absolutely something to consider, but many of these satellites will be flying at extremely low altitudes; at 550 kilometers up, these tiny satellites will naturally de-orbit in a handful of years. Even OneWeb’s, at 1,100 km, aren’t that high up — geosynchronous satellites are above 35,000 km. That doesn’t mean there’s no risk at all, but it does mean failed or abandoned satellites won’t stick around for long.

Just don’t expect to boot up your Starlink connection any time soon. It would take a minimum of six more launches like this one — a total of 420, a happy coincidence for Musk — to provide “minor” coverage. This would likely only be for testing as well, not commercial service. That would need 12 more launches, and dozens more to bring it to the point where it can compete with terrestrial broadband.

Even if it will take years to pull off, that is the plan. And by that time others will have spun up their operations as well. It’s an exciting time for space and for connectivity.

No launch time has been set as of this writing, so takeoff is just planned for Wednesday the 15th at present. As there’s no need to synchronize the launch with the movement of any particular celestial body, T-0 should be fairly flexible and SpaceX will likely just wait for the best weather and visibility. Delays are always a possibility, though, so don’t be surprised if this is pushed out to later in the week.

As always you’ll be able to watch the launch at the SpaceX website, but I’ll update this post with the live video link as soon as it’s available.

The article is inspired from Techcrunch.

The Evolution of Drones and their Applications for Different Uses

The Detroit Auto Show is finally moving out of the cold

Parasitism and the fight for the wrong century