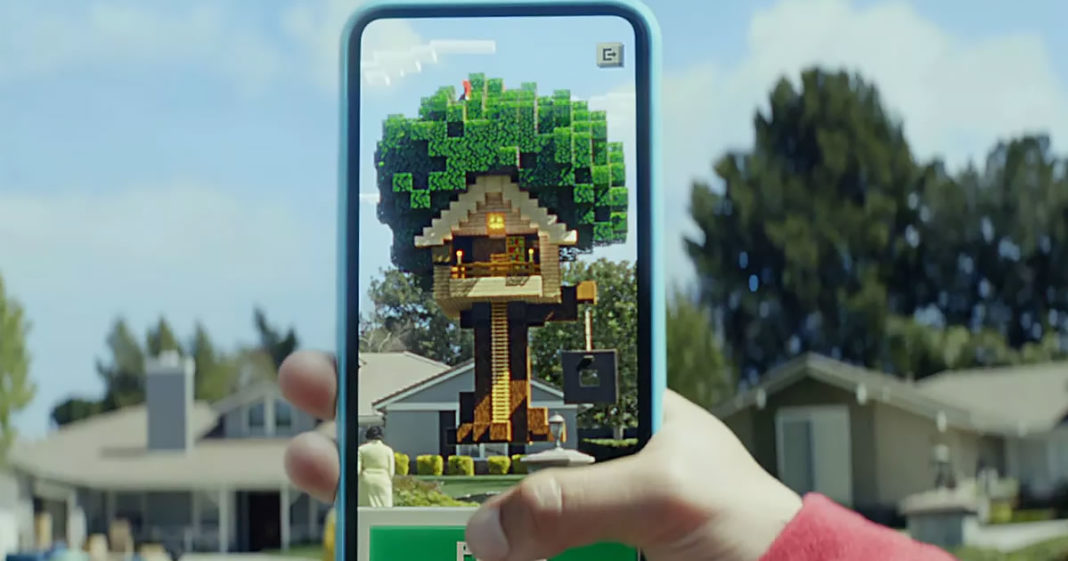 And you can breed cave chickens

When your game tops 100 million players, your thoughts naturally turn to doubling that number. That’s the case with the creators, or rather stewards, of Minecraft at Microsoft, where the game has become a product category unto itself. And now it is making its biggest leap yet — to a real-world augmented reality game in the vein of Pokémon GO, called Minecraft Earth.

Yes, yes — but what is it? Less succinctly put, MCE is like other real-world-based AR games in that it lets you travel around a virtual version of your area, collecting items and participating in mini-games. Where it’s unlike other such games is that it’s built on top of Minecraft: Bedrock Edition, meaning it’s not some offshoot or mobile cash-in; this is straight-up Minecraft, with all the blocks, monsters and redstone switches you desire, but in AR format. You collect stuff so you can build with it and share your tiny, blocky worlds with friends.

That introduces some fun opportunities and a few non-trivial limitations. Let’s run down what MCE looks like — verbally, at least, as Microsoft is being exceedingly stingy with real in-game assets.

There’s a map, of course

The look is blocky to be sure, but not so far off the normal look that you won’t recognize it. It uses OpenStreetMaps data, including annotated and inferred information about districts, private property, safe and unsafe places and so on — which will be important later.

The fantasy map is filled with things to tap on, unsurprisingly called tappables. These can be a number of things: resources in the form of treasure chests, mobs and adventures.

Chests are filled with blocks, naturally, adding to your reserves of cobblestone, brick and so on, all the different varieties appearing with appropriate rarity.

Mobs are animals like those you might normally run across in the Minecraft wilderness: pigs, chickens, squid and so on. You snag them like items, and they too have rarities, and not just cosmetic ones. The team highlighted a favorite of theirs, the muddy pig, which when placed down will stop at nothing to get to mud and never wants to leave, or a cave chicken that lays mushrooms instead of eggs. Yes, you can breed them.

Last are adventures, which are tiny AR instances that let you collect a resource, fight some monsters and so on. For example you might find a crack in the ground that, when mined, vomits forth a volume of lava you’ll have to get away from, and then inside the resulting cave are some skeletons guarding a treasure chest. The team said they’re designing a huge number of these encounters.

Importantly, all these things — chests, mobs and encounters — are shared between friends. If I see a chest, you see a chest — and the chest will have the same items. And in an AR encounter, all nearby players are brought in, and can contribute and collect the reward in shared fashion.

And it’s in these AR experiences and the “build plates” you’re doing it all for that the game really shines.

“If you want to play Minecraft Earth without AR, you have to turn it off,” said Torfi Olafsson, the game’s director. This is not AR-optional, as with Niantic’s games. This is AR-native, and for good and ill the only way you can really play is by using your phone as a window into another world. Fortunately it works really well.

First, though, let me explain the whole build plate thing. You may have been wondering how these collectibles and mini-games amount to Minecraft. They don’t — they’re just the raw materials for it.

Whenever you feel like it, you can bring out what the team calls a build plate, which is a special item, a flat square that you virtually put down somewhere in the real world — on a surface like the table or floor, for instance — and it transforms into a small, but totally functional, Minecraft world.

In this little world you can build whatever you want, or dig into the ground, build an inverted palace for your cave chickens or create a paradise for your mud-loving pigs — whatever you want. Like Minecraft itself, each build plate is completely open-ended. Well, perhaps that’s the wrong phrase — they’re actually quite closely bounded, as the world only exists out to the edge of the plate. But they’re certainly yours to play with however you want.

Notably all the usual Minecraft rules are present — this isn’t Minecraft Lite, just a small game world. Water and lava flow how they should, blocks have all the qualities they should and mobs all act as they normally would.

The magic part comes when you find that you can instantly convert your build plate from miniature to life-size. Now the castle you’ve been building on the table is three stories tall in the park. Your pigs regard you silently as you walk through the halls and admire the care and attention to detail with which you no doubt assembled them. It really is a trip.

It doesn’t really look like this but, you get the idea

In the demo, I played with a few other members of the press; we got to experience a couple of build plates and adventures at life-size (technically actually 3/4 life size — the 1 block to 1 meter scale turned out to be a little daunting in testing). It was absolute chaos, really, everyone placing blocks and destroying them and flooding the area and putting down chickens. But it totally worked.

The system uses Microsoft’s new Azure Spatial Anchor system, which quickly and continuously fixed our locations in virtual space. It updated remarkably quickly, with no lag, showing the location and orientation of the other players in real time. Meanwhile the game world itself was rock-solid in space, smooth to enter and explore, and rarely bugging out (and that only in understandable circumstances). That’s great news considering how heavily the game leans on the multiplayer experience.

The team said they’d tested up to 10 players at once in an AR instance, and while there’s technically no limit, there’s sort of a physical limit in how many people can fit in the small space allocated to an adventure or around a tabletop. Don’t expect any giant 64-player raids, but do expect to take down hordes of spiders with three or four friends.

In choosing to make the game the way they’ve made it, the team naturally created certain limitations and risks. You Wouldn’t want, for example, an adventure icon to pop up in the middle of the highway.

For exactly that reason the team spent a lot of work making the map metadata extremely robust. Adventures won’t spawn in areas like private residences or yards, though of course simple collectibles might. But because you’re able to reach things up to 70 meters away, it’s unlikely you’ll have to knock on someone’s door and say there’s a cave chicken in their pool and you’d like to touch it, please.

Furthermore adventures will not spawn in areas like streets or difficult to reach areas. The team said they worked very hard making it possible for the engine to recognize places that are not only publicly accessible, but safe and easy to access. Think sidewalks and parks.

Another limitation is that, as an AR game, you move around the real world. But in Minecraft, verticality is an important part of the gameplay. Unfortunately, the simple truth is that in the real world you can’t climb virtual stairs or descend into a virtual cave. You as a player exist on a 2D plane, and can interact with but not visit places above and below that plane. (An exception of course is on a build plate, where in miniature you can fly around it freely by moving your phone.)

That’s a shame for people who can’t move around easily, though you can pick up and rotate the build plate to access different sides. Weapons and tools also have infinite range, eliminating a potential barrier to fun and accessibility.

What will keep people playing?

The game isn’t narrative-driven, and although there is some (unspecified) character progression, for the most part the focus is on just having fun doing and making stuff in Minecraft. Like a set of LEGO blocks, a build plate and your persistent inventory simply make for a lively sandbox.

Admittedly that doesn’t sound like it carries the same addictive draw of Pokémon, but the truth is Minecraft kind of breaks the rules like that. Millions of people play this game all the time just to make stuff and show that stuff to other people. Although you’ll be limited in how you can share to start, there will surely be ways to explore popular builds in the future.

And how will it make money? The team basically punted on that question — they’re fortunately in a position where they don’t have to worry about that yet. Minecraft is one of the biggest games of all time and a big money-maker — it’s probably worth the cost just to keep people engaged with the world and community.

MCE seems to me like a delightful thing, but one that must be appreciated on its own merits. A lack of screenshots and gameplay video isn’t doing a lot to help you here, I admit. Trust me when I say it looks great, plays well and seems fundamentally like a good time for all ages.

A few other stray facts I picked up:

Silicon Valley companies are undermining the impact of artificial intelligence

Stories are about to surpass feed sharing. Now what?