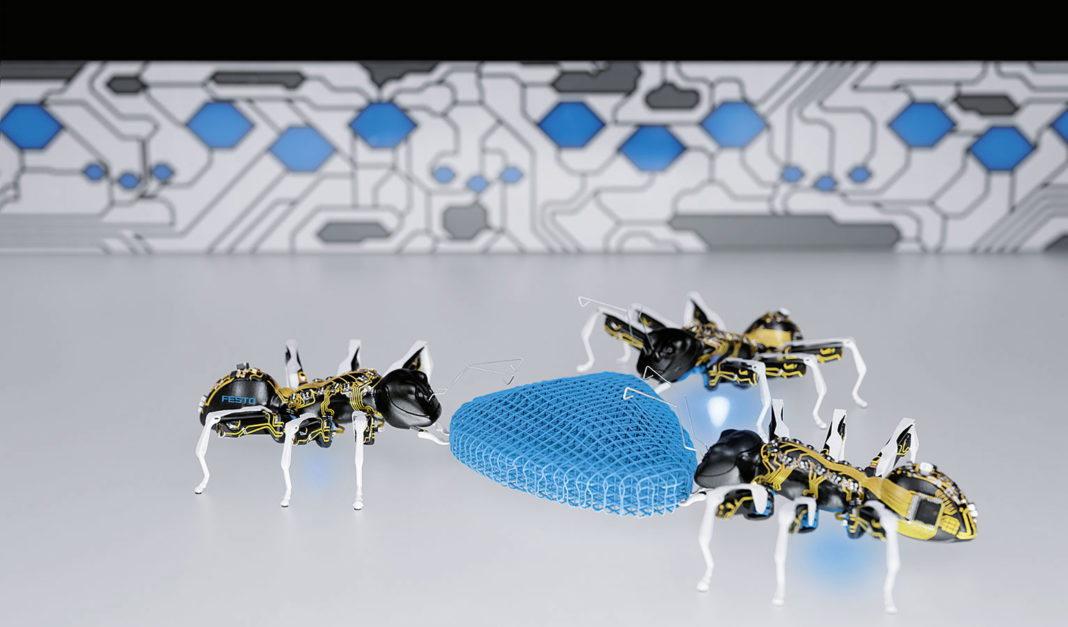 While the agility of a Spot or Atlas robot is something to behold, there’s a special merit reserved for tiny, simple robots that work not as a versatile individual but as an adaptable group. These “tribots” are built on the model of ants, and like them can work together to overcome obstacles with teamwork.

Developed by EPFL and Osaka University, tribots are tiny, light and simple, moving more like inchworms than ants, but able to fling themselves up and forward if necessary. The bots themselves and the system they make up are modeled on trap-jaw ants, which alternate between crawling and jumping, and work (as do most other ants) in fluid roles like explorer, worker and leader. Each robot is not itself very intelligent, but they are controlled as a collective that deploys their abilities intelligently.

In this case a team of tribots might be expected to get from one end of a piece of complex terrain to another. An explorer could move ahead, sensing obstacles and relaying their locations and dimensions to the rest of the team. The leader can then assign worker units to head over to try to push the obstacles out of the way. If that doesn’t work, an explorer can try hopping over it — and if successful, it can relay its telemetry to the others so they can do the same thing.

It’s all done quite slowly at this point — you’ll notice that in the video, much of the action is happening at 16x speed. But rapidity isn’t the idea here; similar to Squishy Robotics’ creations, it’s more about adaptability and simplicity of deployment.

The little bots weigh only 10 grams each, and are easily mass-produced, as they’re basically PCBs with some mechanical bits and grip points attached — “a quasi-two-dimensional metamaterial sandwich,” according to the paper. If they only cost (say) a buck each, you could drop dozens or hundreds on a target area and over an hour or two they could characterize it, take measurements and look for radiation or heat hot spots, and so on.

If they moved a little faster, the same logic and a modified design could let a set of robots emerge in a kitchen or dining room to find and collect crumbs or scoot plates into place. (Ray Bradbury called them “electric mice” or something in “There will come soft rains,” one of my favorite stories of his. I’m always on the lookout for them.)

Swarm-based bots have the advantage of not failing catastrophically when something goes wrong — when a robot fails, the collective persists, and it can be replaced as easily as a part.

“Since they can be manufactured and deployed in large numbers, having some ‘casualties’ would not affect the success of the mission,” noted EPFL’s Jamie Paik, who co-designed the robots. “With their unique collective intelligence, our tiny robots can demonstrate better adaptability to unknown environments; therefore, for certain missions, they would outperform larger, more powerful robots.”

It raises the question, in fact, of whether the sub-robots themselves constitute a sort of uber-robot? (This is more of a philosophical question, raised first in the case of the Constructicons and Devastator. Transformers was ahead of its time in many ways.)

The robots are still in prototype form, but even as they are, constitute a major advance over other “collective” type robot systems. The team documents their advances in a paper published in the journal Nature.

Top 5 Reasons Your Website Is Not Getting the Traffic