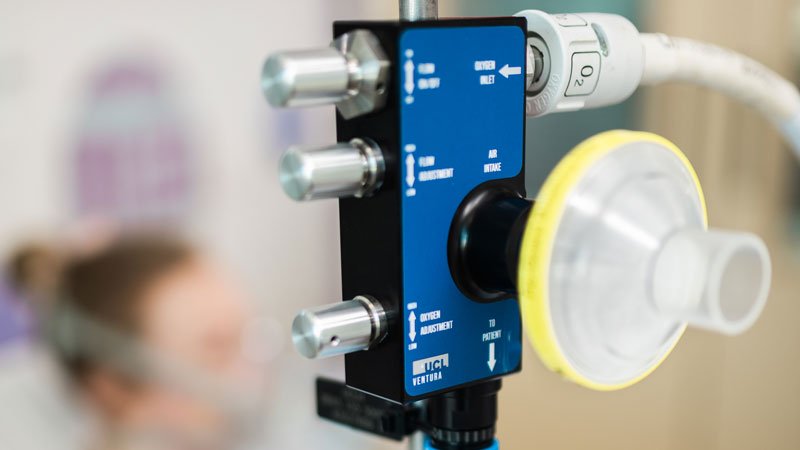 Clinicians and University engineers teamed up with Formula One engine manufacturer to develop a breathing aid for COVID-19 patients that can be mass-produced quickly, a design that could help reduce the need for ventilators.

The Continuous Positive Airway Pressure (CPAP) device, which was re-engineered from an existing machine in fewer than 100 hours, has been recommended for use by the UK Medicines and Healthcare products Regulatory Agency, according to a statement from University College London (UCL), which worked on the project.

CPAP devices have been used in hospitals in China and Italy to treat coronavirus infections, with reports indicating that roughly half of such patients have avoided the need for ventilators, according to the statement. There is a severe shortage of ventilators in many countries, including Britain, that are fighting severe outbreaks.

“These devices will help to save lives by ensuring that ventilators, a limited resource, are used only for the most severely ill,” said professor Mervyn Singer, a critical care consultant at University College London Hospitals (UCLH).

CPAP machines help to keep patients’ airways open and increase the amount of oxygen entering the lungs by pushing air and oxygen into the mouth and nose at a continuous rate. According to the statement, 100 of the newly-designed machines will be used in clinical trials at UCLH, with “rapid rollout to hospitals around the country ahead of the predicted surge in Covid-19 hospital admissions.”

Professor Tim Baker of UCL said a process that can take years had been reduced to a matter of days, explaining that the team had worked “all hours” to disassemble and analyze an existing device before using computer simulations to “create a state-of-the-art version suited to mass production.”

Following clinical trials, Mercedes and other F1 teams could produce up to 1,000 of the devices per day.

Some experts have raised concerns that using CPAP machines may put hospital workers at risk by creating a mist of droplets containing the virus. But Britain’s National Health Service has recommended the devices be used to treat coronavirus patients, saying the risk of infection is low so long as staff wears personal protective equipment.

Andy Cowell, managing director of Mercedes-AMG High-Performance Powertrains, said he was proud that the F1 engine maker was able to participate and help deliver the device on the “fastest possible timeframe.”

Lewis Hamilton won his sixth F1 world title in 2019 driving a Mercedes car. The start of this year’s season has been postponed at least until June because of the pandemic.

In the next few weeks, you can spent time with any one of these...

Silexica, which optimises how disparate applications work together on autonomous cars, raises $18M