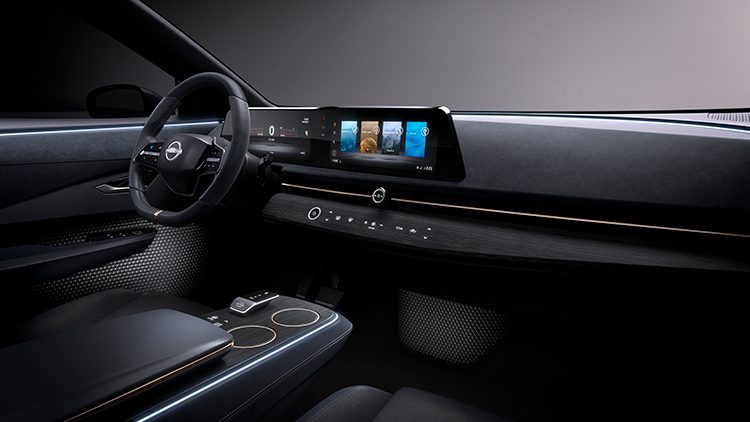 We all know that Tesla started it, and then other mainstream brands followed the trend. Having a bulky, tablet-like screen hogging the center stage on dashboards has been the in thing nowadays, most especially for electric vehicles. Meanwhile, in Yokohama Japan, Nissan thinks that they won’t be offering tablet-like vertical displays in its future cars, and it’s largely to do the way that human eye moves.

“It’s a trend that’s been hard to miss lately: Many new cars have bulky, tablet-like screens smack in the middle of the dashboard,” Nissan commented.

“While these super-sized displays may grab attention at motor shows, carmakers working to create next-generation vehicles also have other things to consider as they attempt to balance design, technology and utility.”

The Japanese carmaker cited its Ariya Concept as an example of its current thinking on in-car functionality. To that end, the crossover concept is fitted with a curved, wave-inspired dual-screen display. Nissan said the design reflects its new “Timeless Japanese Futurism” design language, which adds the sense of a “horizon” throughout the car.

Nissan’s chief HMI design engineer Tomomichi Uekuri explained that the company opted for this design because the human eye naturally looks from side to side when driving.

Although the system consists of two primary displays, one for instrumentation and the other for entertainment, information can be swiped between them to create the sensation of a single display. The driver, for instance, can choose whether the satnav map appears in front of the steering wheel or in the central display.

The Detroit Auto Show is finally moving out of the cold

Football matches land on your table thanks to augmented reality