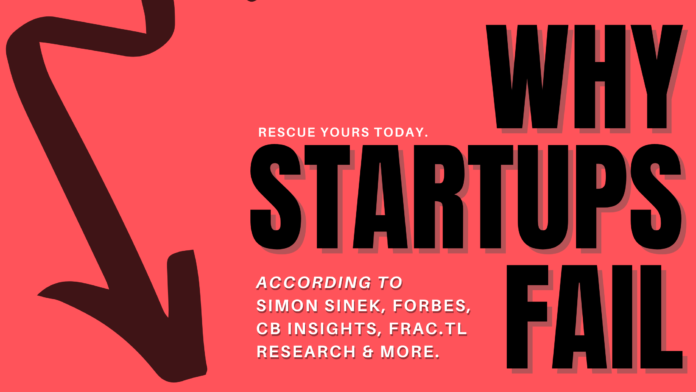 Startups are amazing until you see them failing. There is much talk about Reasons Why startups fail and every talk mentions a different reason. Some say the market conditions, others say it was not the product to suit the customer demand, and some blame the team. All of these factors may count as well, But…

Yes, there’s a big but and today we are going to look at what literally causes startups’ failure. We bring you excerpts from Start with Why by Simon Sinek, as well as CB Insights to Why Startups Fail and more.

Just a century before today, Airplane was thought to be an invention that could sky-rocket both, the inventor and the economy. The idea was almost impossible to imagine at the time, yet so fascinating that it was worth the try. So, the United States War Department contacted a man and gave him $50,000. That man was Samuel Pierpont Langley.

The market conditions were perfect for Langley as there was no one working on the project. The investment was huge, $50,000 in the 19th century. As for the team, Samuel Pierpont Langley, being the astronomer was accompanied by Charles Manly and Stephan Balzer. One of them was a test pilot and the other had the honor of designing the first car in New York.

On the other hand, at the same time in Dayton, some people were working on the same dream. Except they didn’t have money, a dream qualified team, and neither did they have ideal market conditions. Their market conditions were such that their competitor was financed by the U.S. War Department, accompanied by arguably the most qualified team members.

Fast-forward to today, hardly anyone knows Langley whereas everyone knows “some people working in Dayton” ended up launching a successful flight. The day the news reached Samuel Pierpont Langley about the successful flight of Wright Brothers, he resigned from the project.

Why did the Wright Brothers succeed and what you need to learn from it?

This is how you can succeed too.

It all starts by answering “Why do you want to do whatever it is that you want to do”. answering the Why is the key. Wright Brothers were day in and day out were able to picture their dream. They had a clear sense of Why they wanted to design such a mechanism.

James Tobin says “Wilbur & Orville were true scientists, deeply and genuinely concerned about the physical problem they were trying to solve – The problem of Balance & Flight”.  – James Tobin, The Biographer of the Wright Brothers.

The Reason Why Startups Fail: They Don’t Start With Why.

It’s important to communicate from the inside out to answer “Why do you want to do business”.

It’s important to establish this fact. It highlights the importance of serving the community. Delivering Value to the people. In Forbes’s post “Why Startups Fail”, it stated 9/20 reasons for startup failures & 5/ top 10 are related to customers.

However, It is important to understand that the answer to “Why do you want to do business” is not “Because I want to earn money”.

To make this point clear, we are going to explain it in 2 different ways.

First of all, you have your eyes set on the End Goal. That can be perhaps, that you want to run a million-dollar company. So be it. But, is it enough to just know that you want to run a company and not know how to do that? No, right? You have to understand the system through which you are going to start earning money.

In addition to this, It is importantly highlighted in Reasons Why Startups Fail – Top 10 in Frac.tl Research. The non-Viable Business Model is the number one reason among the top 10. Check: what’s Business Model.

If still, the point is a little bit blurry, then let us explain a little differently. Business Person and Business are 2 separate entities. So in this case, You as a business owner will be a separate entity “whose goal is to earn filthy money”.

Learn how to keep your business on a budget.

Why Startups Fail And How Yours Can Succeed.

As we have established that Startups don’t start with why. That is why they fail. But, how can you succeed? Similarly, starting with the Why.

EVEN IF YOU COPY THE BUSINESS IDEA, YOU CAN STILL SUCCEED. Only if you start with why.

The story of S.A. is all about the market needs, which is the top reason among the top 20 reasons startups fail. These reasons are the result of analyses run on 353 post-mortems of startup failures by CB Insights.

Southwest Airlines, who copied the business idea of Pacific Southwest that was operating in California. Southwest Airlines brought that idea to Texas, you can see even the “southwest” is copied. It aimed to fly short-haul flights between Dallas, Houston, and San Antonio.

You can clearly see that Southwest Airlines did not come up with the idea of cheap airlines originally. Pacific Southwest was already doing it in California! But, S.A. had a cause.

It’s about the early 1970s when only 15% of the people used airlines. Moreover, Texas International Airlines, Braniff International Airways, and Continental Airlines were serving the Texas market. Looking at the texas market statistics, 3 giant airlines operating in 15% population, do you have the confidence to operate in such a market?

If your answer is “No”, then you’re no different than Herb Kelleher, the divorce lawyer of Rollin King.

Simon Sinek further analyses that Southwest cared about 85% who were traveling in cars and buses. That 15% were the elite population who wore ties on an airplane. To be the hero for the common man, Southwest had to be cheap and they did it.

Business is all about providing a solution to the people. Solving a problem that no other service provider in your industry has been able to solve. A problem that matters enough to the people. This is where your business comes in. The pure concept of the term “Market Need”.

This is “WHY” you want to do business. Don’t become too obsessed with “What” (being your service) and End Goal (I wanna make filthy money).

Why do most startups fail?

90% startups fail as they have some detrimental features in common. No clear vision which Simon Sinek defines as “why” of the business. No Market need also serves as the most detrimental factor as stated in CB insights.

What happens when startups fail?

When startups fail, most people end up losing confidence. However, success lies in understanding that you have discovered a way to fail which is not to be repeated. Move on & take a fresh start.

Why do startups fail in India?

No Market Need is why Indian & Pakistani Companies fail to recognize. Among many reasons, becoming over-obsessed with “Novelty” & considering it “Innovation”, also being obsessed with the actual innovation is wrongfully thought to be the only way to become a world-leader.

Technology has shaped the market