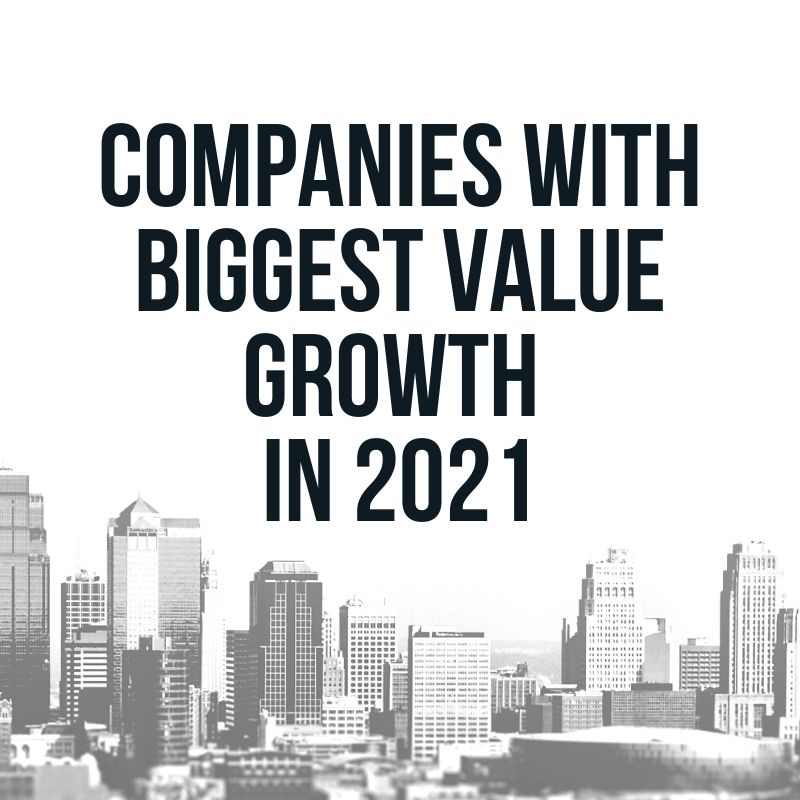 2020 and 2021 was quite tough for companies to keep growing. Thousands of companies went bankrupt because of world-wide lockdown, but in this ranking we want to complete opposite. Lets take a look at biggest brand growths in 2021 year.

Instagram platform established in 2010 and bought by Mark Zuckerberg’s Facebook in 2012 is still one of biggest social-media apps across the world. Every year the amount of active users is increasing, nowadays it reaches over 1,4 billion active users, which is over 16% of world population!

Zuckerberg at the beginning of November announces the fusion of all his applications (Facebook, WhatsApp, Instagram, Oculus, messenger) into one huge company brand named Metaverse.

Kweichow Moutai in 2021 overcomes Pepsi and Cola-cola and now is the most valuable beverage company in the whole world and biggest non-technology company in China.

This company is producing and selling spirit named Maotai. It is most popular type of luxury alcohol in China. They are also taking care of package, developing anti-counterfeit technology, owning their own research and development product.

Meituan was established back in 2010 by Xing Wang as a shopping platform, very similar to European application named Groupon.

In 2015 Meituan and Dianping started to collaborate. Dianping was China’s equivalent to TripAdvisor, but with that type of application it had to be great collaboration.

And of course it was, in 3 years Meituan-Dianping collaboration managed to reach all the huge cities across the China, getting over 350 million uses and offering cooperation with over 400 thousand small businesses. Over the years application managed to offer services like: Catering, food delivery, taxi delivery, hotel and motel reservations, availability to buy cinema tickets and bike rentals.

Due to pandemic year 2020 was the best one for all food-delivery and catering services, including especially Meituan.

Pinduoduo was established in 2015 by a former Google engineer Huang Zheng. This application focuses on giving opportunity to farmers to sell their goods using Pinduoduo.

Magnificent thinking from Huang Zheng to make a product that helps over 30% of Chinese population to sell their goods easier and quicker. Chinese Republic mostly contains mountains and highlands and outside of big cities people are usually living from farming.

In 2015 Pinduoduo was named one of the fastest growing companies in the world, rapidly increasing popularity of the app gave the founder over 300 million users in first 3 years, now in first quarter of 2021 he assumes that he had over 720 million active monthly users on average, which is gigantic success according to age of the company.

TikTok was established in late of 2016 by a company named Bytedance and just few months from beginning of the application they managed to buy Musical.ly for 1 billion dollars.

If someone would think that TikTok trend stopped in 2021, he is completely wrong. In this year TikTok reached over 1 billion monthly active users, which is 21% of all internet users and overcomes 3 billion downloads on Appstore and Google play.

The TikTok trend and popularity encountered world-wide pandemic perfectly, people who were not able to work remotely and all the teenagers and kids were locked in their houses and the fastest growing social-media app of all time just kept us from being bored.

On first place is of course company named Tesla with beloved or hated Elon Musk as a CEO. Tesla was a small brand up to 2020, where the value of this brand was increasing every day for a whole year.

Key to gain so much popularity and customers was that Tesla managed to produce only electric cars, all other big moto companies also tried to build electric automobiles, but they also had lots of conventional machines. When the world-wide hype on electric cars began, Tesla was well prepared for that.

One of the keys to success for Tesla brand and popularity was also very specific way of being of Elon Musk, one of the richest man on the planet back then. He managed to be so popular that everyone on the world heard of him, and when they checked on him on Google or somewhere people also saw his companies such as Tesla or SpaceX and gave them branding boost.